Quick.  The lights just went out–where is your nearest flashlight?  Can you find it in the dark?  And does it have fresh batteries so it will actually work when you need it?  Well, if you’re at my house with kids, I know where the flashlights are supposed to be and sometimes they are actually there and most times the ones that are where they belong will light up at least for a little while.  But not always.

So when I read about the Red Cross Blackout Buddy, I thought I better get one and test it out.  Here’s how they work.  The flashlight plugs in to a wall plug and you LEAVE IT THERE.  You don’t need to take it out when it’s charged or anything, just leave it in the plug.  If your kids can leave them alone, you could put them in various locations throughout the house.  I chose a higher plug in my kitchen that the kids (especially the toddler) don’t get to.  Now you always know that your flashlight is where it belongs and is charged and ready to go. 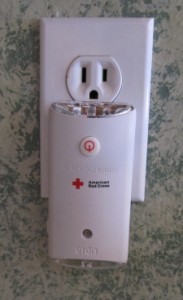 But wait, there’s more.  The Blackout Buddy has an optional setting with a darkness sensor so it can be used as a night light.  Plug it in a hall, on the stairway, or in any room you might be frequenting in the middle of the night and you can replace your standard nightlight with one that is cleverly disguised as an emergency flashlight.  The night light is a single LED light that shines out the bottom of the flashlight.  It’s not too bright, but I wouldn’t have it in my bedroom–I like sleeping in the dark.

And that’s not all that I love about this light.  The best part about it is that if your power does go off, it lights up without any assistance from you!  We happened to trip the breaker in our kitchen the other day and on shot this light from the corner of the room. The blackout light is the flashlight end of it, opposite the nightlight, so if it’s plugged in so the nightlight shines down, the blackout light shines up.  It’s a 3 LED light, so it’s brighter than the nightlight. Once you unplug it from the wall, you get to control when it is on and off with the button on the front of it.  Although not as bright as some lights, the Blackout Buddy will definitely get you around your house in the dark.

Now you can have a light that is charged and ready to use AND you can find it in the dark! The Red Cross Blackout Buddy is a great little light that solves the most common problems with having a flashlight in the house.  I’ll be getting some more of these.