Have you ever wanted to make your own yogurt? It’s really not that hard and saves a ton of money if your family likes to eat yogurt (like mine does). Today we’ve got a step by step tutorial for making your own yogurt from scratch. As a side note, this was also my son’s science fair project since he had to do something dealing with bacteria. I was not thrilled at the thought of the mold collection from our refrigerator on display at his school, so convinced him to make yogurt instead. At least he could eat his results that way!

To make yogurt you’ll need:
1 quart of milk (any fat content is fine)
A thermometer that measures up to about 200 F (most candy or meat thermometers will work for this)
A yogurt culture starter which usually comes from existing yogurt.  Here’s where my husband says, “So you can’t make yogurt unless you have yogurt?”  Well, kind of.  Yogurt starter can also be purchased freeze dried

from specialty stores or online.  If you’re using fresh yogurt as a starter, you’ll only need 2 TB per quart of milk.  Follow the instructions with your freeze dried starter for how much to use.

You’ll also need some jars or containers to incubate the yogurt in (canning jars work great).

Some instruction sites say you can only use “plain” yogurt for a starter, but we used vanilla and it worked fine.  Because we were doing a science fair project, we tested three different brands of yogurt.  Mountain High which is pretty expensive and has a more natural yogurt texture, Kroger store brand, and Western Family store brand.  We have such great variety out here in the sticks (not) that I ended up getting different sizes of containers just to get three of the same flavor. 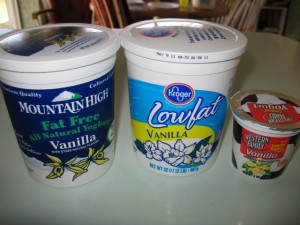 I tried to find one without the active cultures in it and thought I had, but apparently even the cheapo store brand had active cultures hidden in it–you just had to check the ingredient label closely.  I guess they don’t want you to know they’re in there or something.  Weird.  To make sure your yogurt starter has live active cultures, look for one of these on the packaging: 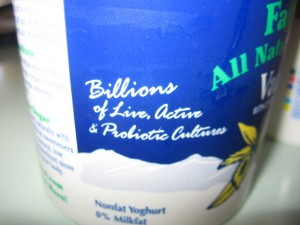 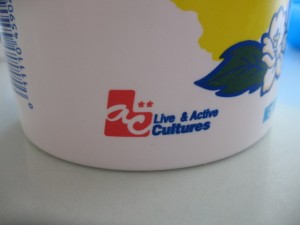 Or it might be hidden way down on the ingredient listing: 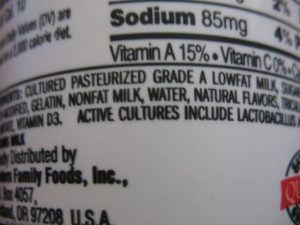 That’s it for ingredients.  I told you it was easy.  You can add 1/4 to 1/2 cup powdered milk if you want–it is supposed to make the final product creamier. We might try that next time, but it is fine without it.

Now, let’s get started shall we?

Step 1. Heat your milk to 185 F.   If you’re adding the powdered milk, you can add it before heating the milk or after.  You can put your milk right in a pan to heat it if you want, but you’ll have to be extra careful you don’t scorch it. We did ours in a double boiler system using quart canning jars–one for each brand of yogurt starter we were testing.  I should have had the jars off the bottom a bit (like on a canning rack or the rack that goes in the bottom of a pressure cooker), but they survived fine. 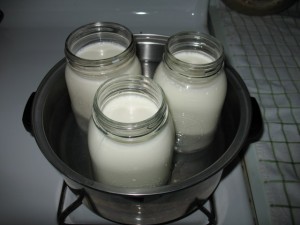 By 185 F, the milk is getting pretty foamy on top.  Also make sure you’re stirring it before taking the temperature to get an accurate reading. 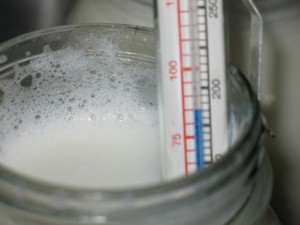 Meanwhile, set out your yogurt starters so they’re warmed up a bit (room temperature) when it’s time to use them.  We put the containers back in the refrigerator after this picture, but left the little bowls on the counter to warm during the milk boiling process. 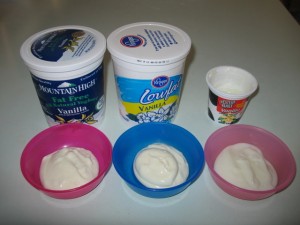 Step 2.  When the milk is 185 F (one of my instructions sheets says to actually boil the milk, so it’s probably not going to hurt if it goes over temperature a bit), take it off the heat and let it cool down to under 120 F but not lower than 90 F.  110 F is ideal.  We put ours on a towel on the counter.  You could use a cold water bath to speed the process up a bit, but I wasn’t in a hurry so we just let them cool on their own.  Stir and check the temperature occasionally until it’s about 110 F.  (Now I’ve got the meat thermometer in it instead of the candy thermometer–it doesn’t matter which you use.)

Step 3.  Mix in 2 TB of the yogurt culture to each quart of milk.  It’s best to make sure it’s mixed thoroughly so put the yogurt starter in a bowl and add a little of the hot milk.  Stir that until it’s smooth, then add it all back to the rest of the milk and stir again.  No yogurt lumps–you want that culture distributed evenly throughout your milk. 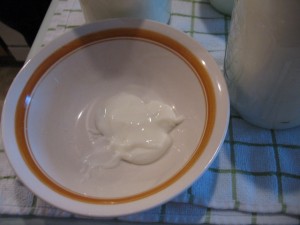 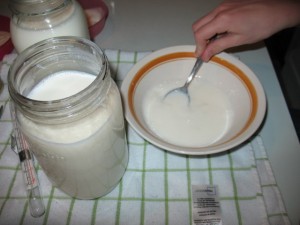 Step 4.  Pour your yogurt-to-be into containers to incubate.  If you have yogurt cups, that’s great.  Canning jars work fine.  Decent tupperware would also work depending on what you’re using to incubate with.  We used pint canning jars and labeled them with each brand of yogurt we were using for starter.

Step 5.  Incubate 3-12 hours.  To incubate your yogurt you want to keep it around 110 F for the duration of the incubation.  You can use warm water or hot towels in a cooler, your oven with pilot light or super low setting or by pre-heating it and then using the pilot light to keep it warm, a yogurt maker, your Wonderbox or similar insulated cooker, your food dehydrator, a warm window in a car, or whatever other method you can devise for keeping your yogurt warm.   I used my dehydrator set at 115 F since that’s the temperature the dehydrator book said to use.  To incubate your yogurt in your Excalibur dehydrator, remove the trays and put the yogurt right on the bottom of the dehydrator.

Step 6.  After 3-12 hours, when your yogurt has set, take it out and refrigerate it.  The longer you leave it in the incubator, the tangier it gets.  At the end of 3 hours (now 11:00 pm), only the store brands had set up, so I put them in the fridge.   Your yogurt will keep for 1-2 weeks in the refrigerator just fine.  You can use some of this yogurt to start your next batch.

The Mountain High brand still looked like milk at the 3 hour mark.  I seriously thought I had done something wrong since that was the more expensive one with “billions” of live active cultures in it.  It was probably just protesting because my son put frowny faces on those labels (that was the yogurt he liked the taste of the least).

When the yogurt is set, it will have the whey liquid floating around.  You can drain this off or stir it in–whichever you prefer.

At that point, I left the Mountain High yogurt in the incubator and went to bed (it was 11:00 already).  I’m not sure what time it finally set, but this morning, after 11 hours in the dehydrator it was set up fine.  The kids had some of the cooled yogurt for breakfast this morning.  It was really mild, having only spent 3 hours incubating.  Barely tangier than milk.  I’ll leave it longer next time to get more “yogurt” flavor.  We added some freezer jam/syrup to it to flavor it a bit and they loved it.  Pretty easy.

For the actual experiment to show at school, we’ll do a batch without adding starter at all so it won’t set up since I couldn’t find a yogurt that didn’t have active cultures in it.

So there you have it.  Making yogurt and/or a bacteria science experiment in less than a day!  Easy and way less expensive than buying yogurt all the time.  For food storage purposes, I have some of the freeze dried cultures

.  That way I don’t have to count on having yogurt in my refrigerator when I want to make yogurt.  And if you keep using your existing yogurt to make new yogurt, a package of the freeze dried cultures will last a long time.