This is the first in a series of firearms informational posts. If you have any questions, PLEASE ask. No question is a dumb question here. I’m keeping it basic and simple, so those of you with tons of firearms experience, try not to get bored on me, okay?

Here’s my short background–I shot very little growing up, but really enjoy it now. I am NOT a certified firearms instructor, nor have I received formal training outside of my concealed weapons course and hunter’s safety although I would love to. I have a Federal Firearms License (FFL) which means I am licensed to sell guns and get your background check done. Enough for now? On with our first lesson.
First, before anything else, we must cover firearm safety rules. Safety is deadly important with any type of gun. Learn it, practice it, teach it to your kids. We’ll keep things simple here. If you want serious training, I suggest calling a local range or firearms training center in your area and getting information on courses–a lot of places run ladies only classes if you ladies don’t want to be in a class with a bunch of guys.
Rule number 1: Every gun is always loaded. EVERY GUN is ALWAYS loaded. Let me say that again another way–Every gun is always loaded. You have to believe that every gun you handle, come across, look at, breathe on, dream about has live ammunition in it even if it doesn’t. Always.
Rule number 2: NEVER point a gun at something you don’t want to destroy. Keep your muzzle pointed in a safe direction. Guns are made to destroy stuff. Imagine a laser beam coming out of the barrel of your gun that will obliterate anything it hits. Never point it at anything you don’t want destroyed.
Rule number 3: Keep your finger off the trigger until you are ready to fire. That means you have the gun in position, sights lined up, the whole deal BEFORE you even put your finger on the trigger. Practice picking up your gun with your trigger finger pointing straight to the front. You can usually rest it alongside the gun just above the trigger area very comfortably. This needs to be your natural grip. I even noticed myself grabbing our screw gun with my trigger finger straight–it’s habit.
Rule number 4: Be sure of your target and what’s beyond it. Your bullet will not always hit your target and can often go through it. Make sure you know what you are shooting at (no guessing–“well, it could be a deer, or it could be a cow, or a big raccoon . . .”) AND what is behind it (and in front of it for that matter) that could also be hit. Also be aware of what could come between you and your target. Make sure the path from you to your target is clear and behind your target is also clear of things that don’t need shot. You also want behind your target something solid like the ground to stop the bullet if it passes through or misses the target.
That’s the basics, I think common sense also dictates that if you don’t know what you’re doing, just don’t mess with a gun.
Now on to lesson 2. Parts of a gun. We’ll just cover this now and get it out of the way so you will know what I’m talking about when I say “trigger guard” “muzzle” “sights” and all those fancy gun words. Study the following picture very carefully: 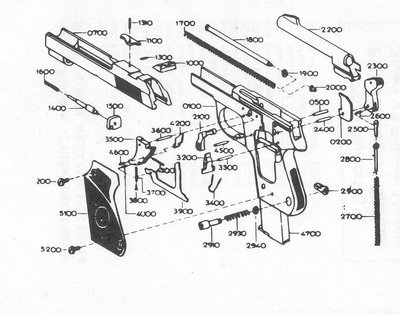 Wow! What a crazy lot of pieces! That was fun, now we’ll move on to the parts of a gun we’ll actually be discussing. The following pictures are of a bolt action rifle, a semi automatic handgun, and a revolver. They all have the same basic parts, they just look a little different on each of them. 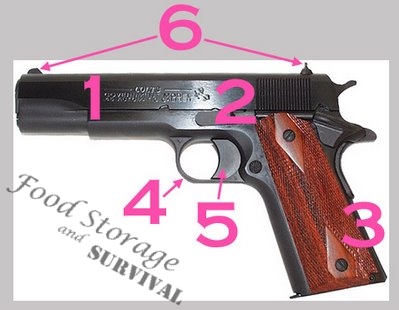 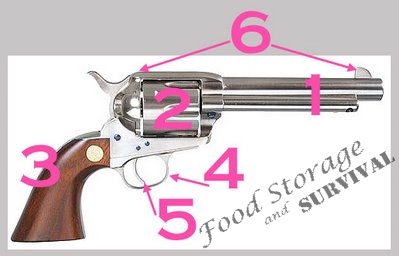 1. Barrel. The barrel is the part the bullet moves through after it is fired. The muzzle is the open end of the barrel that the bullet exits the gun through.

2. Action. The action is the part that has the mechanism that fires the bullet. My rifle picture is a bolt action. There are also lever action, semi automatic, break action single shot rifles. The top handgun is a semi automatic. The bottom is a revolver.
3. Grip or Stock. The grip or stock is the part you hold onto. Generally it’s a grip on a handgun and a stock on a long gun.
4. Trigger Guard. The piece around the trigger that protects it from getting bumped.
5. Trigger. The part your finger pulls to make the gun fire.
6. Sights. Sights come in various styles also. Most firearms have a front sight at the muzzle end of the barrel, and a rear sight at the back end of the barrel. Funny thing, the rifle picture I used has no sights (it wants a scope real badly) so I just put the arrows approximately where the sights would be if it had them.
For those of you who are crying about the magazine release button not being included, remember we’re keeping things simple here–it’s our first lesson!
Any questions? I’m sure I missed something.
Here’s your homework assignment:
Teach your kids what to do if they find a gun (from NRA’s Eddie Eagle program):
If you see a gun:
STOP!
Don’t Touch.
Leave the Area.
Tell an Adult.

For more firearm fun, check out the rest of the series: