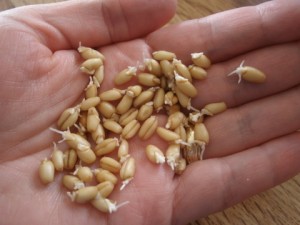 1. Eat it plain.  I love sprouted wheat right out of the sprouter.  By the handful.  I can eat it like candy.  Really.  You could also add some seasonings to it if you like.  Sprinkle it with some seasoned salt, cajun seasoning, cinnamon sugar, whatever you like.  Try it–you may become a sprouted wheat addict also.

2. Top a salad with it.  Sprouted wheat when it’s young is kind of nutty flavored and chewy.  Put it on your salad like sunflower seeds.

3. Add it to your bread.  If you’re adding it whole, make sure it’s good and moist or the wheat kernels may be a little hard once your bread’s baked.  You can also run it through a meat grinder and add it to your bread dough after it’s a bit chopped up.  Yummy.

4. Make bread with it.  Try this recipe for sprouted wheat bread that doesn’t use any flour or try an essene bread (mine didn’t work–bake it on a pre-heated baking stone to get it to bake right).

5. Keep it growing and grow some wheatgrass.  I haven’t grown wheat grass, but I know other people who have and really like it and others that have tried it and don’t like it.  Here’s a good video tutorial in case you want to try it.

6. Dry the sprouts out and make them into sprouted wheat flour.  I’ve never tried this either, but here’s a video on how to do it (you could also dry them in your dehydrator).

7. Make blender wheat pancakes with it.  This tutorial doesn’t have the wheat sprouted, only soaked, but it would work with sprouted wheat as well.

So there’s a start.  I’m sure there’s more uses for sprouted wheat than I have listed.  If I missed your favorite use for sprouted wheat, leave me a comment and let me know what you do with it.  Me? I really love to just eat sprouted wheat plain.  In fact, I think I’ll go get some started sprouting now.