Have any of you ever tried making Essene bread?  There are instructions for making it in John Hill’s How to Live on Wheat that are copied straight from some ancient text–the same instructions are on this Wikipedia page.  I thought I’d try it out and see if it was any good, since those bible folks must have been doing something right to live 900 years, right?  So here’s how it went, and I’m open to suggestions.

First, you sprout wheat.  Mine was sprouted about 12 hours longer than I had originally wanted, but I forgot to stick it in the fridge the night it was done and so it just kept growing.  Still good, but maybe it sprouted too much for this project?  I don’t know.  The wikipedia instructions say to sprout it over 4 days and mine was only about 2 1/2 days. 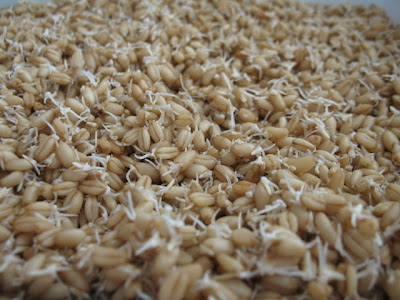 Next, you grind your wheat sprouts.  I’m not using two rocks to grind the sprouts into a paste–I don’t have that much time or energy, so I used my food processor.  It made nice sticky wheat sprout paste in no time. 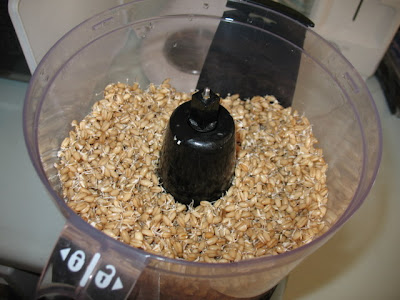 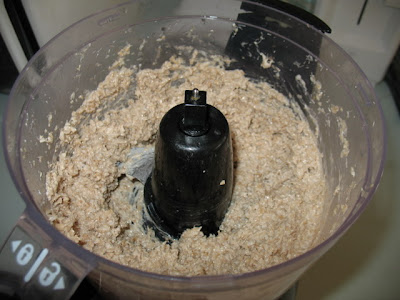 I formed the dough into balls and smashed them together a few times to knead them.  You’ll have to wet your hands here–this stuff is really sticky.  Then I flattened the balls out on a lightly greased pan to bake.  The whole dough is just ground up sprouted wheat.  There was no measuring–just however much wheat you have you grind up and make into dough then spread out nice and thin on the pan for baking. 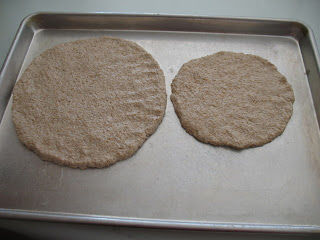 Bake at low heat (150-200 degrees F) for 2 hours or so.  Of course, the Essenes baked it in the sun, but it’s not a very sunny day, so I put it in the oven.  The instructions say when the bottom springs back, it’s done.  Now here’s the problem I had–the bottom never really cooked.  The top of the dough disks were cooked and put on a crust, but when the end of the two hours came, I flipped them over and they were gummy on the bottom–like the dough rolled up in blobs on my spatula and stuck all over the pan.  Did I need to flip them earlier?  I’d probably make them smaller next time to make them more manageable to flip.  I also thought of using my pizza pan that has holes in it so the bottom of the crust will bake (kind of like this one

)–maybe that would get the bottom to cook.  Or maybe the dehydrator would do a better job?  Here’s the top of one and the bottom of the other right after baking. 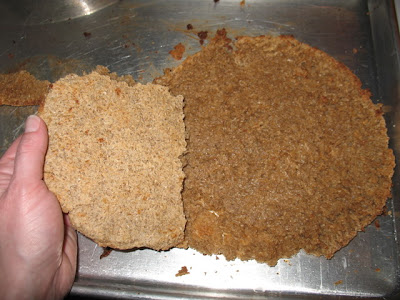 So now I’m in a hurry to get this done because I need to leave in about 20 minutes, so I turned the heat up to 350 and put the pan back in with the breads’ gummy sides up to try to make it edible.  Then I pulled it out when I had to leave and let it sit on the stovetop and cool off and dry out a bit.  They turned out very sweet just like the instructions said they would.  The instructions in the book also said it would be dense and chewy, which to me is not the same and sticky and gummy.  Here it is at bedtime after sitting out the whole afternoon/evening trying to dry a bit–a little better. 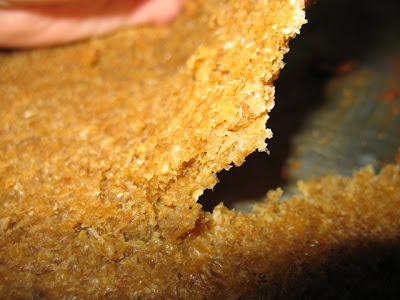 Sweet husband broke some up the next morning and made hot cereal with it.  He’s such a good sport to try out whatever I make–even if it doesn’t look so appetizing.  I ate some right off the pan.  The leftovers went to the chickens.  So, any ideas?  I’d love to make it work–it’s so simple and it’s nice to have alternatives, especially when they are as healthy for you as sprouted wheat.