Okay, a quick one tonight–it’s late and it’s been a long week. Just thought I’d share a little idea on sick kids. If I’ve got one I know is having stomach flu problems (vomiting, throwing up, whatever you want to call it) I fix up their bed like this: 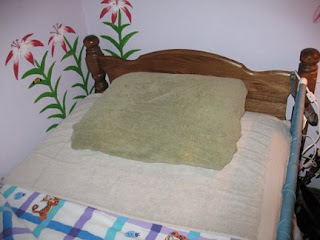 Lay a towel over the top section of the bed and wrap the pillow in another towel. Provide a bowl, but when they’re real small they don’t even know what’s going on until it’s over so the bowl is sometimes useful, sometimes just decoration. The towels make cleanup in the night a little easier (I’m all for getting as much sleep as I can). If they throw up on the towels, you can just pull them off, throw them in the washer (or wherever you want so you can clean them up later) and replace with new towels. Even if it soaked through some to the sheets, the new towels will be dry enough until the next bout. No need to change sheets a hundred times a night. This is best if you have a plastic/waterproof matress cover on the mattress–they’re cheap and every kid bed should have one on just in case. (Now you know why it’s been such a long week!)