I wasn’t going to post anything on soap making until I had it figured out a little better, but had such a good laugh at Lisa’s recent soap making experience (far too similar to mine!) that I thought I’d post how it’s going at this point, which is why it is Part One, and I promise I’ll write this up in easy to follow directions when I get a few more pictures of the process.

I watched my mom make soap about a year ago and so have been mulling over doing it myself for a while now. Well, I work at church with a group of 12 and 13 year old girls and we do an activity every week with them and they thought making soap would be fun, so we put it on the calendar. Then I had to find the ingredients, and living out in the boonies, odd ingredients like lye are difficult to come by. In fact, nobody within 45 miles had even contemplated carrying lye in their stores, so I ended up ordering it online from The Lye Guy and paying for hazardous materials shipping to get it here. I figured since I had to pay the hazardous materials fee, I might as well order more than one bottle of the stuff, so I went for his buy 5, get one free deal and now have LOTS of lye. :)

Then I got a recipe online for some lady’s favorite soap that had coconut oil, palm oil, cocoa butter, and lye water in it. Lye water–check. Cocoa butter–check (I have this in my lip balm supplies). Coconut oil–checkish–I had some, but would need more to make the amount of soap necessary for 8+ preteen girls to take some home at the end of the activity. Palm oil–big ol’ no check, but it just so happened I was going “over the mountain” to the BIG town 2 1/2 hours away and I knew they had a natural foods store so I’d just stop in there and pick some up along with some more coconut oil and maybe a nice scented essential oil since I have peppermint and orange for my lip balm, but that’s all and I thought maybe lavender would be nice for soap.

Well, long story short, the natural foods store did NOT carry Palm Oil, and I went home with my coconut oil and lavender oil in a snowstorm and a bit of a panic since the activity was planned for the next night and I had already told the girls we’d be making soap and to come with their safety glasses, rubber gloves, and apron–how could I possibly dissapoint them? So I called my mom in the morning (good thing for moms), and she said I didn’t need Palm Oil–it was very expensive if I could even find it, and I could use lard instead–it’s real cheap and lathers well and I could just get it at the grocery store. Oh. Okay. Well, not MY grocery store, so I had to drive 10 miles to the next slightly larger grocery store where they did have it but hiding in the meat cooler section, so the soap making activity was officially on for that evening.

I got my girls all together and we got started and as I’m telling them how to measure the ingredients on the scale in some bowl that was left in the church kitchen, one of them pipes up and says, “Have you ever done this before?” How dare they doubt my authority??? ;) Uhhhh, well, not exactly, but I’ve seen it done . . .

First we measured out the water and the lye on my handy postal scale and slowly mixed the lye into the water. Then we real quick opened the window in the kitchen and half the girls left the room coughing from the fumes. Outside would be better . . . or under your range hood with your fan that vents to the outside, not like my range hood that vents right back into the kitchen. 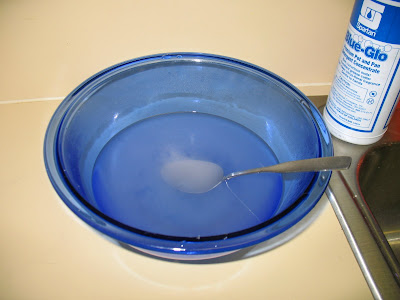 The Lye water gets really hot, so we moved it over by the open window to cool down and hoping for fewer fumes that way.

Next, we measured the oils into somebody else’s bowl (good thing they left it there) on the scale so we knew how many ounces we had. 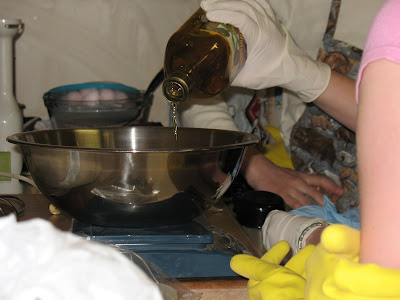 Then we put all the oils except the lavender into my fancy double boiler setup (big frying pan with water in it, big pot inside with oils in it) and heated it up. Sometimes you just have to make things up. 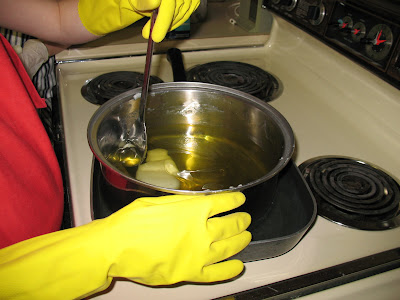 The idea is to get the lye water and the oils at 110 degrees or thereabouts at the SAME TIME. Now I used my meat thermometer to check the temperature and I only have one, so we had to keep checking and washing and checking and washing so we didn’t mix any lye water with the oils prematurely. Of course we heated our oils too hot and had them about 125 when our lye had cooled off to about 115 so in a panic we put cold water in our big frying pan and added some ice hoping to cool the oils off quickly, meantime spilling water all over the stove top when we put the pot of oils in it. Magically, the oils cooled off to 110 about the same time the lye hit 110, so then we slowly added the lye water to the oils and mixed it up.

You can mix them by hand, but apparently it takes a very long time, so I used my mom’s method and mixed it with an electric stir stick like you use for making milkshakes (you can kind of see it at the far left of the “measuring oils” picture above). Only forgot to let go of the button as I was lifting it up once and got oil/lyewater mess on my pants and shoes (of course it missed my apron completely). After about 15-20 minutes with the stir stick, 3/4 of the girls had left to play in the gym and the soap finally reached “trace” which is where it leaves a line or scar looking thing if you drip some soap on the top of itself. It’s about hot pudding consistency at this point. This is where you add any extras like essential oils, rose petals, whatever you want to fancy it up.

Then we poured it into little cheapo gladware containers so the girls could all take some soap home and wrapped them in towels to keep them from cooling off too quickly. I told them to pop the soap out of the molds in 24 hours and then let it cure for 4-6 weeks. Well, this morning (it’s been at least 36 hours) I tried to pop my soap out of my gladware and it is stuck in there like nothing else! So I knifed around the edge and it still won’t come out. So I called my mom again and she said do not panic, just give it some more time to harden and it will come out. Phew. I haven’t gotten any calls from my girls that their soap wouldn’t come out, so either they figured out how to get theirs out or they’ve forgotten what’s in that little towel bundle by their bed . . . 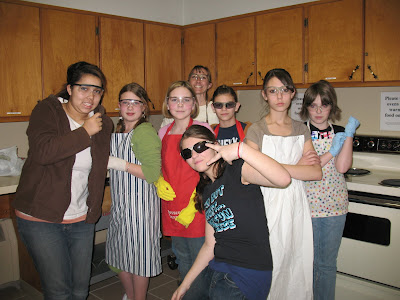 At any rate, I’m planning on making soap again with my prep ladies group, so I’ll take more pictures then (did I mention I was trying to keep track of a bunch of 12-13 year olds AND take pictures this time?). And I’ll keep you posted on the soap progress.