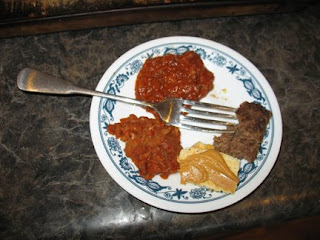 I had a couple of MRE’s that were about 20 years old and needed to go so I did the noble and generous thing and shared them with some friends.

MRE means Meal Ready to Eat and they were designed for the military. You used to be able to get them singly at army surplus stores, but I’m not sure where you can get them now except by the case at a few online stores.
The good thing about MRE’s are that they are a fully contained meal for one person. They do not need cooked and require very little if any water. They can be warmed up in boiling water, by laying them on your vehicle engine, putting them in the sun, etc. They last a very long time. These were about 20 years old and had NOT been kept in ideal settings. They had been stored in closets, basements, car trunks, etc.
The bad thing about MRE’s is they taste terrible! They are the epitome of calories and preservatives all rolled together in one disgusting little package. I have never met an MRE that has not cured my hunger–just open it and smell it and I’m not hungry any more. But don’t let my opinion put you off trying it for yourself–some varieties and meal components are edible and a few people actually even like them.
I don’t think they even make these flavors any more, but the first was something like “Ground Beef in Spiced Sauce” and the second was “Beef Patty with Bean Component”. Sounds delicious already, doesn’t it?
These were the full MRE’s with the side dishes and accessory packets (including chicklets and toilet paper). The only thing they didn’t have with them were the heaters which was fine because we just used the microwave. Oh yeah, and we needed our own silverware.
We had to reconstitute the freeze dried beef patty and the peaches. Everything else was open and eat. A couple of components did not smell or look good (cheese sauce packet was especially bad) so we just threw them out. Here’s the reconstituted beef patty and the “gravy” which was actually just salty beef flavored water. The ground beef in spiced sauce is on the right. It was kind of like a really bad sloppy joe mixture. 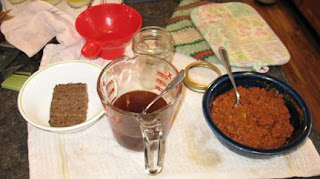 Another crazy thing about MRE’s is the amount of packaging they have. There’s at least as much packaging as there is food. I feel for the military people who have to pack out all that trash! The beef patty was arguably the best part of the main dishes and the crackers with peanut butter spread were edible as were the peaches. Not good, but edible. The worst part was actually the chocolate covered brownie which I will have to say only resembled a brownie in looks. Not even the kids would eat them.

I have been told the newer MRE’s are better tasting than the old ones but I’ve tried a couple of the new ones also (pork chop, chicken patty, beef stew) and couldn’t stomach them either. I have found that the pound cake is actually okay tasting. So if you’re ever offered MRE’s for dessert, eat the pound cake and stay away from the brownies!