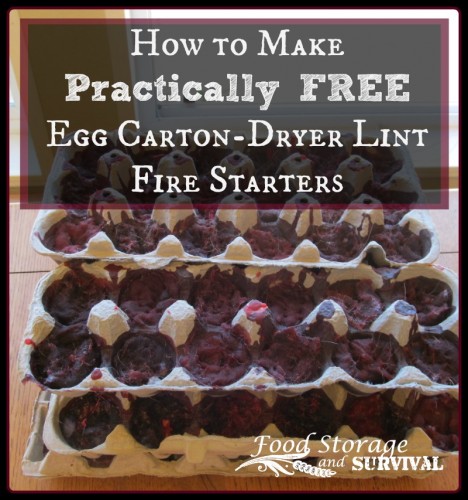 Here’s a fire starter that’s easy to make from materials you probably already have floating around your house.  These little balls of fire will burn for approximately 15 minutes after being lit, giving you plenty of time to get a fire going even if you have to dry out some of the wood.  I keep them in my car emergency kit and take them camping.  Ready to get started?

Here’s what you’ll need:
Dryer lint–any variety will do.
Egg carton–doesn’t matter if it’s a dozen, 18 or the “flats” as long as it’s the pressed paper kind, NOT styrofoam or whatever else they might make egg cartons out of.
Wax–from old candles, crayons, or buy paraffin wax at the store (although it’s cheaper to buy cheap big candles at the thrift store or yard sale for this job–it doesn’t have to be food grade wax).
A sense of adventure–just kidding, if you didn’t have that already you wouldn’t be here!

First, get your egg carton and collect your dryer lint by cleaning off the lint trap of your dryer. DO NOT throw it away (I actually feel bad throwing dryer lint in the trash!).  If you don’t do enough laundry at your own house, maybe you could spend an afternoon at the local laundromat and collect lint there. 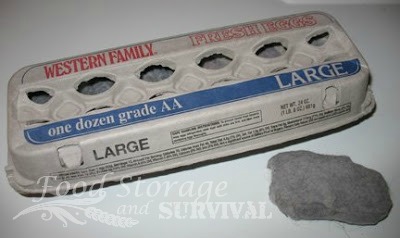 Next, stuff the dryer lint in the egg carton where the eggs used to be.  Don’t stuff too tight or your wax won’t be able to penetrate the lint ball and it won’t light and burn very well.  If you don’t do a lot of laundry, this may take a while to fill a carton, if you’re like me and washing clothes all the time, you might fill a whole dozen with a full day’s laundry.  Again, it doesn’t have to be packed in tight. 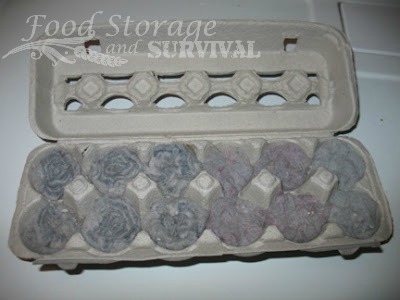 Now, set up a double boiler to melt your wax. You need a pot with water in it, and a can of some kind (I like the big V-8, tomato juice, apple juice, pineapple juice cans). Your can must be METAL and fit inside your pot of water with room to spare around it. Do not use a smaller pot that you like (or that is part of your double boiler setup) as your can–you’ll be melting wax in it and will likely ruin it!

Put your wax in the can and the can in the pot of water and heat the water. The wax will melt inside the can. 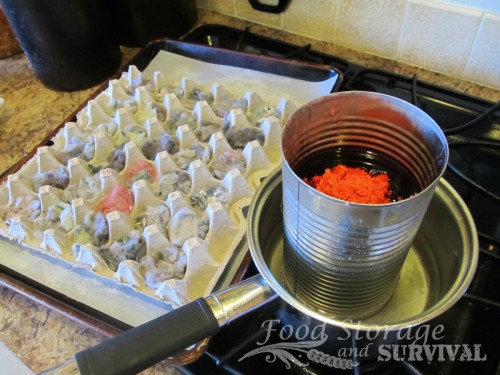 Put your egg carton on something that the wax can leak through onto (like waxed paper, foil, cardboard, or something you don’t care about) because some of the wax will soak through the egg carton.

When the wax is melted, scoop or pour it onto the lint in the egg carton.  Make sure it soaks all the lint.  You might want to get a fork or stick and smush it around in the egg cup a bit to ensure it is saturated all the way through.  When you’re done waxing the lint, let it cool and harden and voila!  Cheapo fire starters!

You can leave them all together in the shape of an egg carton and then tear them off one at a time, or tear them all apart and store them separately. They won’t light with a spark, so you’ll need matches or a lighter to get them burning. Throw some in your emergency kit, car kit, camping kit, whatever else kit you have that has matches in it. In our fire test, one of these little babies burned for 17 minutes and put out a good flame sufficient for even fire novices to get something burning with! 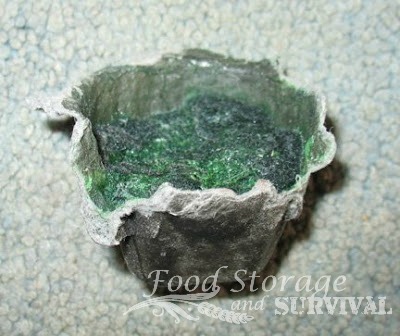 So now, what do you say to some eggs for breakfast and a day of laundry? :)