Pickled Hot Peppers. Sorry, it doesn’t even sound appetizing to me, but sweet husband likes them on his sandwiches and we had an abundance of hot peppers in the garden this year, so as I’m contemplating what I’m going to do with them, he suggests slicing them and canning them for sandwiches. Sure. Sounds easy enough I suppose. Well, after getting it done, I wouldn’t really recommend it, but you’re welcome to learn from my experience and try anyway. So here’s how it went.

First, a friend and I picked all the hot peppers from the garden (it was going to freeze, so they had to get out of the garden anyway) and I washed them. Aren’t they lovely? Peppers are much better to look at than to eat. 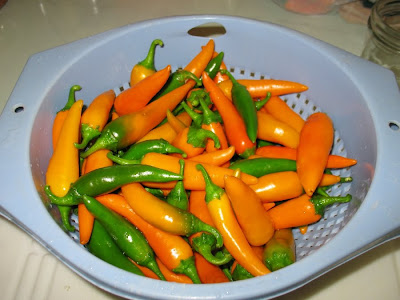 These are Bulgarian Carrot Peppers and Georgia Flame Peppers. They look pretty much the same as each other–green when immature and dark orange when fully ripe, about 3 inches long and hotter than all get out. I was going to bottle them separately and see which was better, but didn’t manage to keep the two varieties separated during the chopping process, so they’re all mixed up in the bottles now.

Next I got a pot and mixed up the pickling mixture: 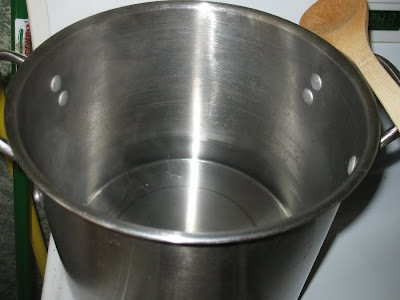 Heat it to boiling and simmer for 10 minutes, then remove the garlic and discard. I ended up using 4 times this recipe by the time I was done. Also got the boiling water canner warming up and a little pot to heat lids in.

Have you ever been in a kitchen with boiling vinegar? Definitely cleans out the sinuses.

So while the vinegar solution was heating up, I put on my rubber gloves, chopped the tops off the peppers and cored them with a potato peeler (bottom right in the picture). You don’t have to core them if you don’t want to, but sweet husband doesn’t like the cores on his sandwiches, only the peppers, so ours got cored. He actually did this bowlful of peppers while I took the kids to their soccer games. Kind of like a bouquet of peppers. 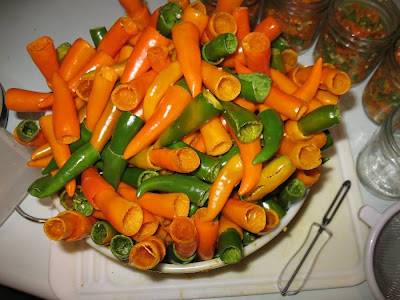 Now, here’s where I quit taking pictures as things got a little interesting. Once the peppers were cored, we needed to slice them up, so I first tried using my salad shooter. It sliced a few and then quit working. Meanwhile I am having intermittent coughing attacks from the peppers being chopped. I do not like peppers. They do not like me. I decided this should be an outside job in the future.

My little gal came in to tell me something and had her hand on the counter while she was talking, then after she left the room her eye started hurting–I determined it was pepper juice from the countertop, so she got the burning eye wash on screaming child treatment and felt much better. After that, the kids were banned from the kitchen, and I was sure everything I touched or the peppers were even close to was contaminated with burning pepper juice. Hence, no pictures. I didn’t want to take the gloves off or contaminate my camera by using it with the pepper gloves on.

I still needed to chop the peppers, so I got out my dangerous food processor that the lid doesn’t latch down and sliced a few in there, but it kept getting peppers caught between the slicing blade and the lid and then it wouldn’t slice anymore, but just spun around with peppers caught in it. About this time, sweet husband offered to put the kids to bed so I could get these peppers finished before tomorrow morning.

Then I remembered I had the slicer attachment for my Kitchenaid, so I got that out. I’ve never used it before. Turns out the blades are not very sharp on it–in fact not at all sharp, so it just kind of peeled the pepper meat off the skins, turning it into mush and left the skins spinning around between the blade and the pusher. So after exhausting all my automatic pepper slicing options, I was left with the good old fashioned knife and cutting board. This went along fairly well until I cut a hole in one finger of my glove and pepper juice got on my finger and burned it. I donned a new glove and went about slicing like a crazy chef lady until I was almost finished and as I cut, pepper juice squirted up right in my eye! I peeled off one glove and ran to the bathroom and did an eye flush in the sink for I don’t know how long. Amazingly, when I was done, my contact was still in. Weird. I went back to the kitchen and decided the few peppers that were still in the bowl could just go to the chickens. I was done with peppers.

I put the sliced peppers in the jars and poured the hot vinegar solution over them leaving about 1/2 inch headspace. Wiped the rims and put on the hot lids and put the jars in the canner. After 10 minutes in the boiling water canner, the peppers came out looking all pretty and harmless. I put them on the rack to cool and after repeating the process for a second batch of jars, went about cleaning up the kitchen.

While I was cleaning up, my garbage disposal quit working and with little pepper bits floating around in my sink from washing all the chopping equipment, the sink quit draining. Now I have a sink about a third full of water with pepper bits in it and can’t get it to drain, and somewhere in my brain I remember in another house when the disposal quit working there was a little tool you could use to unjam it. So I look under the sink and miraculously there is a little allen wrench looking tool between my grocery sack collection and the pile of rags and random cleaners I never use. I find a place the tool might fit on the disposal, stick the tool in and pull on it. Just as I think I’m loosening something up, the whole disposal comes off the bottom of the sink with a bang and a scream (that was me) and all the water with pepper bits in it is all over under the sink and on the kitchen floor. I was amazed at how fast I threw towels at the mess considering how late it was and how tired I was. Nobody woke up. I reattached the disposal and cleaned up some more. I took a picture to preserve the moment. ;) Then continued cleaning and sanitizing the entire kitchen so it was safe to walk into and make breakfast in the next morning. 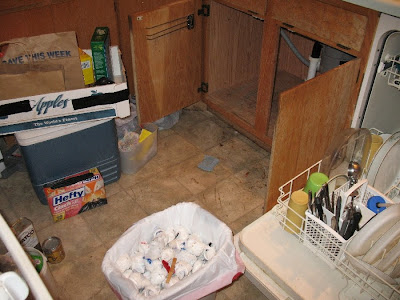 Sweet husband figured out how to unjam the disposal–I had the right tool, I just used it in the wrong place.

I hope the peppers are good. I’m sure not trying them. I’ll say again, I don’t like peppers, but they sure are pretty to look at. 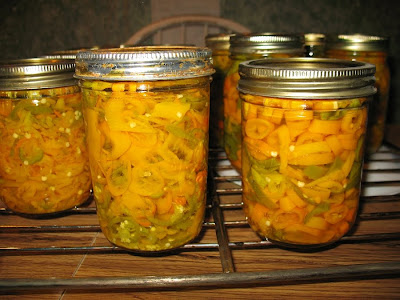 Now, if you choose to try this, here’s a few warnings:

WEAR RUBBER GLOVES, safety glasses, respirator, heck, maybe a whole chem suit while you’re working with hot peppers–serious chemical burns can result if your hands are not protected. We actually wore latex gloves–they are not the same thing as rubber gloves–the pepper oil can get through the latex gloves somehow. Strange but true. Keep the gloves on while you clean up–I didn’t do this and ended up burning my hands and arms AFTER the sink ordeal.

Even if you think you don’t have pepper contamination on you, don’t go touching your eyes or sensitive areas! You’ll probably end up burning yourself.

DO NOT LET YOUR CHILDREN HELP when you’re slicing peppers. Don’t even let them in the room!

And leave the plumbing to the plumbers.