I had some more apples and thought I’d try making canned apple pie filling. I’ve never done this before, so I got online and looked up recipes and here’s the one I ended up using:

Put it all in a pot and cook it until it gets thick on medium heat. Fill jars with prepared apples and pour mixture over. Hot water canner for 20 minutes. Recipe makes about 5-6 quarts of filling.

I didn’t know how much syrup this would make so I used my pressure canner pot to cook it in. It is big and I’ve never burned anything in it because the metal is so thick. Turns out I could have used a smaller pot, but it worked okay, especially when I decided to double the second batch.

I ran the apples through the peeler/corer/slicer machine again and put them right into a solution of 2 quarts water+2 TB Fruit Fresh so they wouldn’t go brown on me. After soaking, I loaded them in jars awaiting the syrup. It took about 5-6 medium apples for each quart jar. 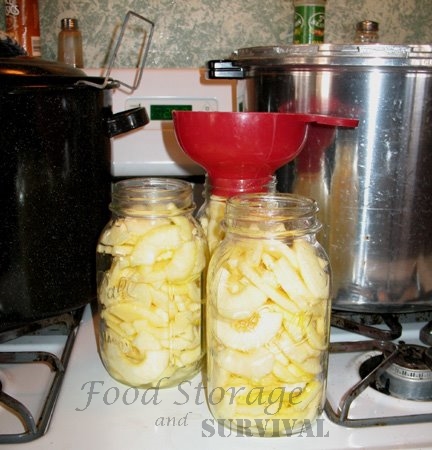 Now, when the recipe says “cook until thick” it does not tell you how thick this stuff gets! And the longer it cooks, the thicker it gets, so by the time I had my apples ready in the jars and the water in the canner boiling, the syrup had gelled up quite thick. When I poured it in the bottles I had to wait for it to trickle down before adding more. The good thing is it was heavy enough I didn’t have to chase out air bubbles–it pretty much filled all the gaps by itself. 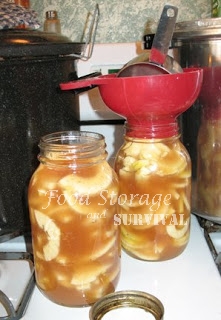 Definitely use a canning funnel on this one! Then wipe the rims of the jars and screw on the lid and ring. Once one jar is done, you can put it in the canner on the raised rack to keep it from getting cold while you’re waiting for the syrup to trickle down in the other jars!

DO NOT overfill the syrup! Leave a little more headspace than usual on these bottles, the syrup expands a little when it’s canning–there were a few bottles I didn’t think would seal, but they all eventually did. You’ll need to wash the jars off when they’re cooled–they get really sticky! Take off the rings and wash around the threads on the jar and ring so you’ll be able to get it off again when you’re ready for pie! Here’s the jars after they canned and cooled: Yummy! 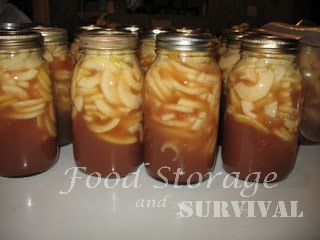 Here’s the “lovely” pie I made with the leftovers. The last run in my canner I put in 7 full bottles and still had a little syrup left in the pot. I didn’t want to run the canner to bottle one more bottle full, so I just made a pie with it. I am no Martha Stewart, but it tasted good anyway. 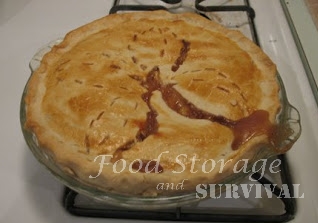 I used what I think were golden delicious apples so it is really sweet. Tasty, but sweet–we put ice cream on ours last night and were about sweeted out! A tarter apple might be better.

This pie was real soupy when we ate it still hot. It sets up as it cools, so the next day a slice of pie actually looked like a slice of pie and not 2 pieces of crust swimming in apple cinnamon soup! So if you’re making this for company, make it ahead of time so it has time to cool and set up.