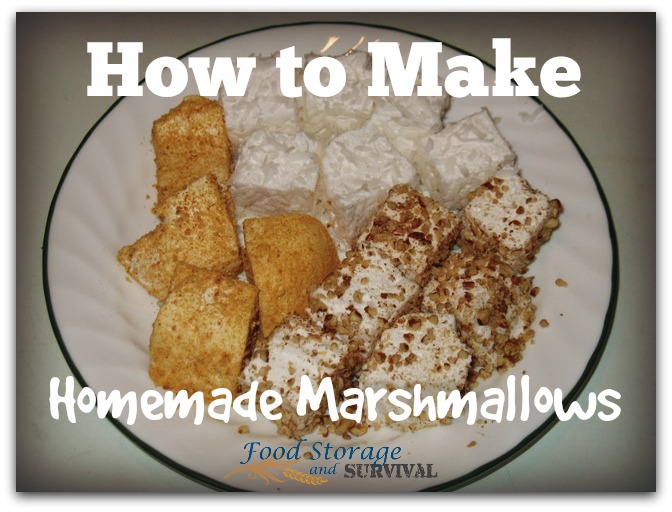 I know that last one is hard to get a hold of sometimes. ;)

Put 2 cups of sugar in a pot with 3/4 cups cold water and stir it up.  Get some little helpers if you can. 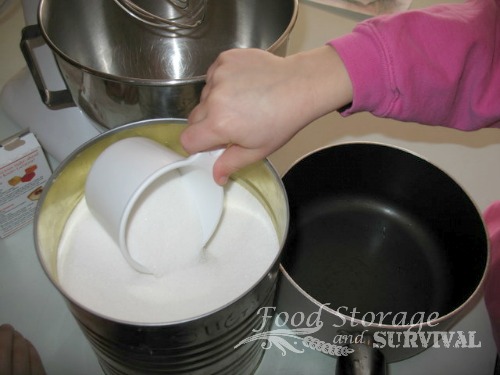 Put it on the stove and heat over medium to medium high heat to “soft ball stage” (approx 234 to 240 degrees according to my cookbook).  It will take a bit to get to that stage.  I don’t use a thermometer, I just check the syrup by dropping a little bit into cold water and pulling it out to check if it forms a soft ball.  Kind of like this video, but I usually catch it at the earlier part of soft ball when the ball flattens as soon as it is formed.  Have a helper stir it if you want.  If not, it will still cook to soft ball stage without any trouble without stirring. 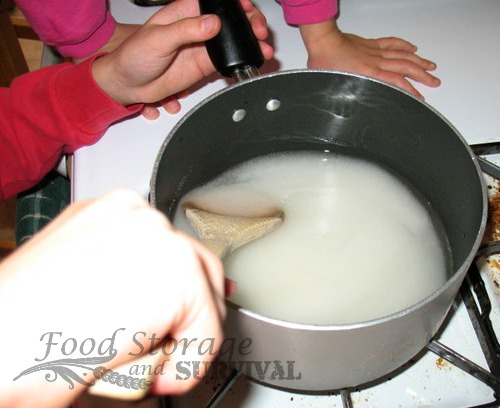 Meanwhile, get 2 eggs and separate the whites from the yolks.  Your mom showed you how to do this, right?  If not, here’s a youtube video with some groovy music to show you how to separate egg whites.  We just want two egg whites.  Put them in your mixer and beat them until they are “stiffly beaten”.  I’m using a KitchenAid mixer.  The egg whites don’t look like much to start with, but they expand quite a bit with the beating. 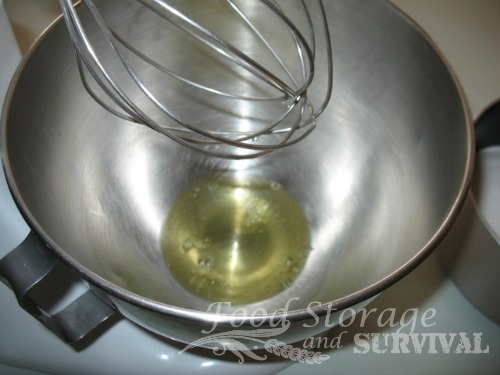 You’ll know they’re stiffly beaten when they form stiff peaks or hold their shape when you pull the beater out. 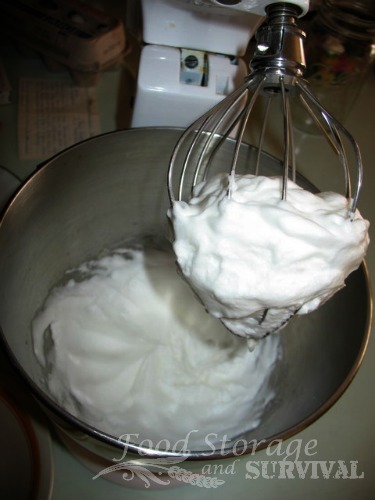 Take those egg whites out of your mixer and set them aside for later, then rinse off your mixer bowl and beater–you’ll be using them again. 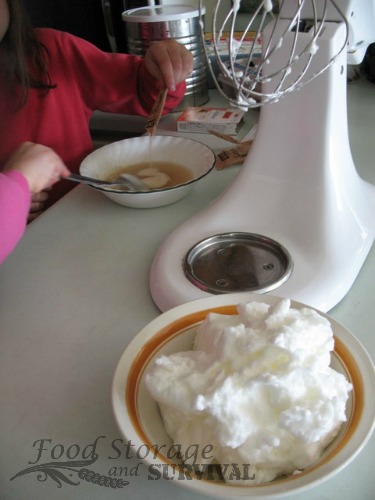 Check on your sugar syrup mixture.  Got that soft ball yet?  You can check it anytime while the egg whites are beating.

You should still have time to mix up the third part of the marshmallow magic before you get to soft ball stage.  It’s easy.  Put 2 TB gelatin (the one time I measured, this came out to be 3 packets) in a little bowl with 1/2 cup cold water.  In the picture above, my helpers are putting the gelatin in the bowl and I haven’t rinsed the egg whites off the beater yet. 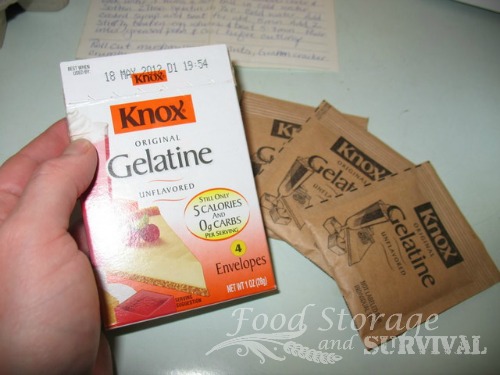 Let it sit and gel up while you take care of the syrup.  It doesn’t need a lot of time, you’ll see it sets up pretty quickly, but there is also no problem if you do the gelatin step earlier if you want and let it sit longer–won’t hurt anything.

5.  Whip the syrup and gelatin.

Once your syrup is at soft ball stage, pour it in your mixer bowl. 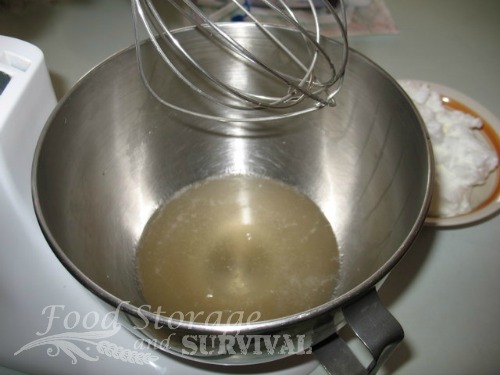 Then add the softened gelatin and mix on med-high to high speed for about 5 minutes. 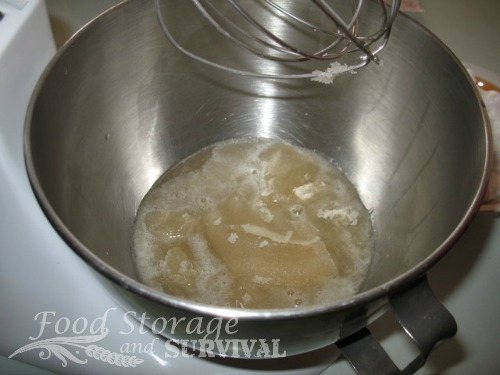 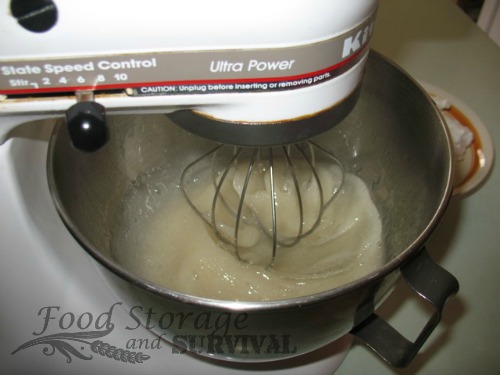 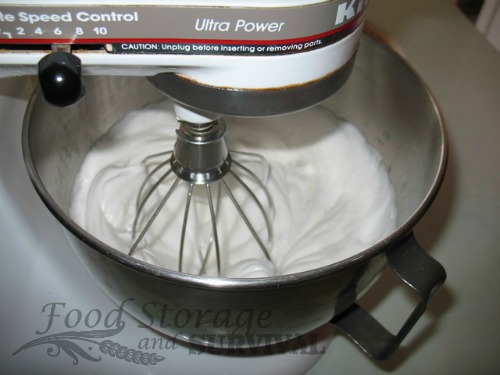 After 5 minutes, it looks a bit like marshmallow creme. 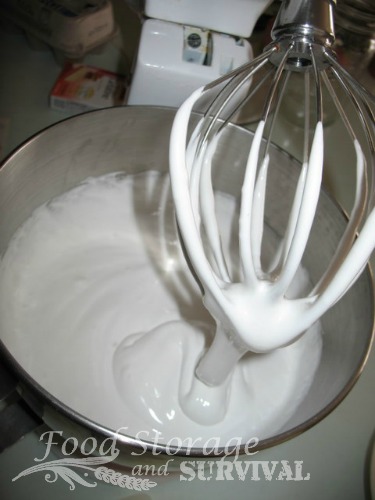 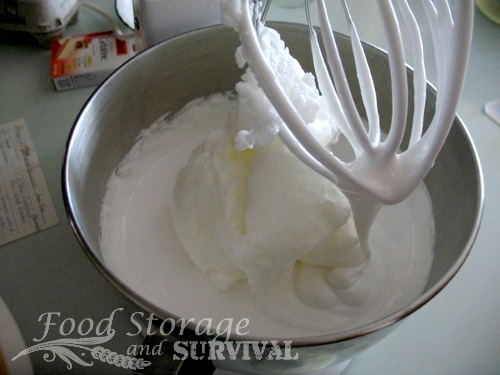 At the end of that beating, it’s not as runny as it was before the egg whites. 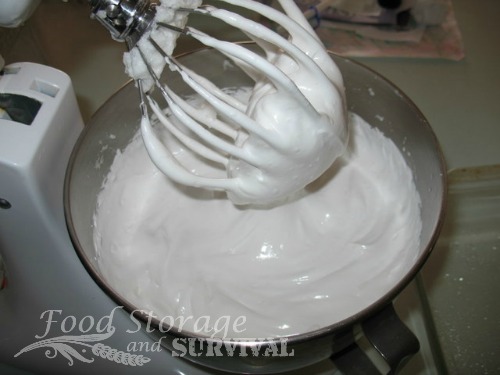 Now you’ll need a pan.  I put this batch in a 9×13 greased glass pan.  You can use whatever pan works for you, but if it’s not smooth or greased well, the marshmallows are going to stick.  However, you don’t want it over-greased because that’s just gross on your marshmallows.  I use a light coating of cooking spray, but you could probably butter it as well.

Pour/scoop the marshmallow mixture into the pan and spread it around evenly. 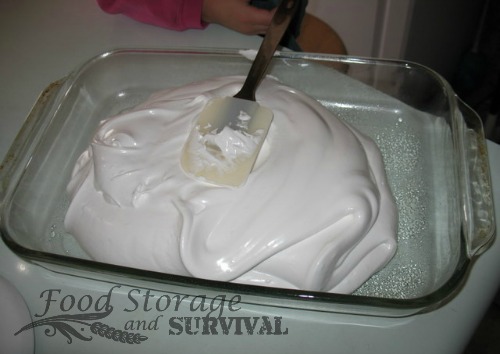 Well, as evenly as you can.  It’s pretty sticky stuff. 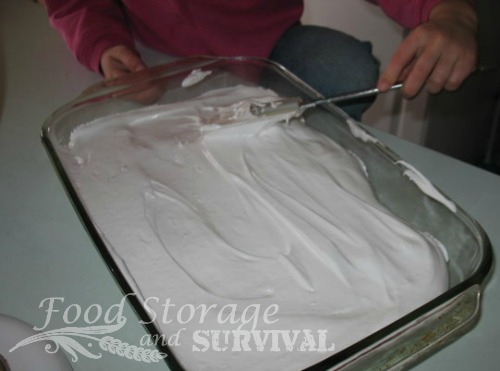 Put plastic wrap or a pan cover on it, set it aside and let it cool. 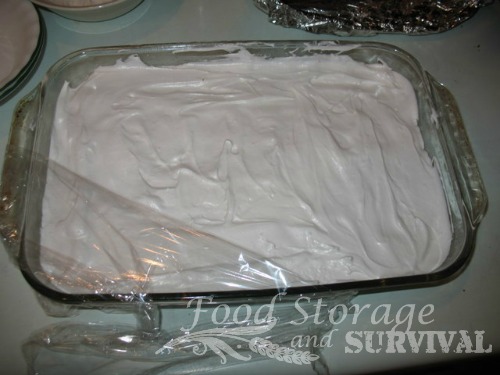 While they’re cooling, you can get some marshmallow coatings ready.  We like to roll ours in crushed graham cracker crumbs, coconut flakes, or nut crumbs.  Run the nuts through the food processor for a bit to get smaller pieces–we usually use pecans, but walnuts or almonds or whatever nut you love would probably be fine also.  You may find something else you love to coat your marshmallows with.  Like dip them in chocolate, or roll them in hot cocoa powder.  I think I’m going to try some rolled in powdered freeze dried fruits or yogurt bites.  They’re just really sticky if they’re left plain. 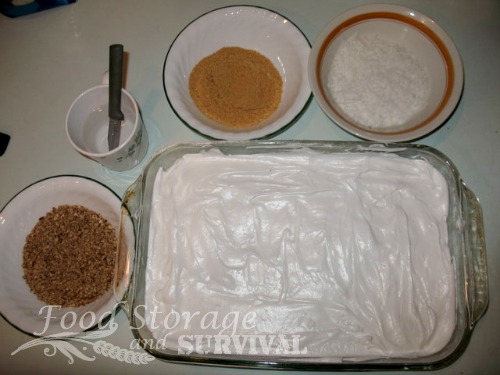 When it’s all done cooling, it’s time for the good part.  Eating it!  Oh wait, you’ll have to cut and coat them first.  You don’t want to eat the whole pan at once.  To cut the marshmallows I get a cup of hot water and a NON-serrated knife.  A little paring knife works great.  The serrated knives just tend to stick more.  Dip your knife in your hot water and cut a little section.  Dip again, cut a bit more.  We usually go about an inch square or a bit smaller. 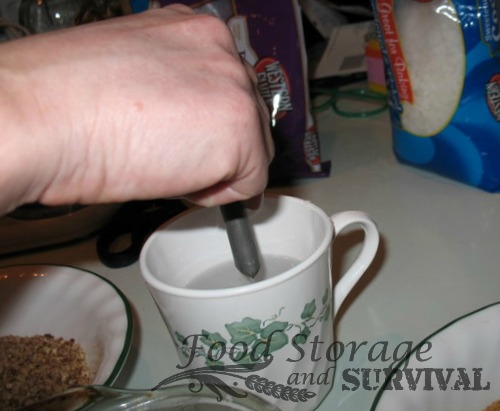 Repeat until you’ve cut as many as you’ll eat in the next day or so.  You can cut them all if you want, just make sure you’ve got a nice airtight container to keep them in.  We kind of like ours freshly cut and rolled in the fun coatings, so we’ll just cut what we’re going to eat and then cut the rest as we want them.

The graham crackers are my favorite.

The kids like either graham crackers or the coconut.  The coconut doesn’t stick too well, so just do your best. 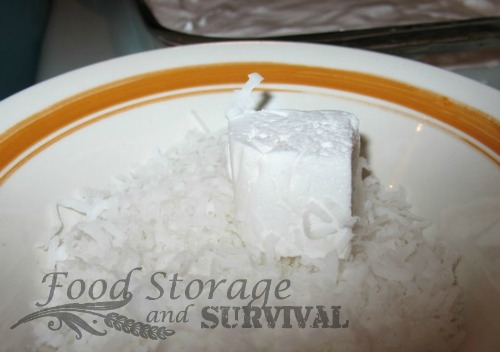 Dad likes the nuts the best.  He has some kind of radar for when the marshmallows are being cut. 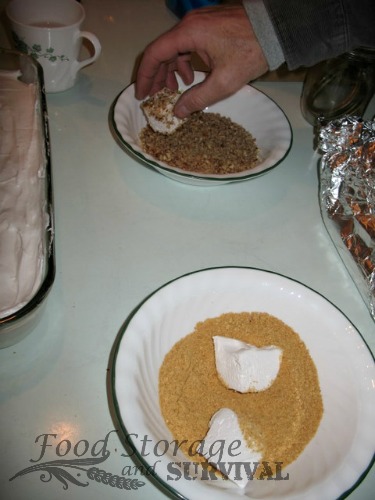 Arrange them on a plate and take a picture if you’re fast enough.  I had to tell everyone I wanted a picture so they’d quit eating them as soon as they were rolled! 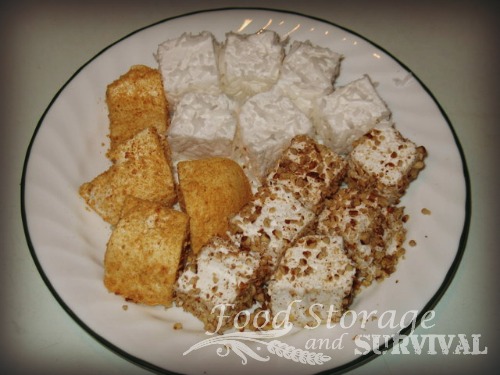 Really, that’s not that hard, right?  We’ve made these many times and never had a batch that didn’t turn out fabulous.  I’ve never tried roasting them over a campfire or putting them in hot cocoa.  They’d probably do fine, but we just eat them straight.  Enjoy!