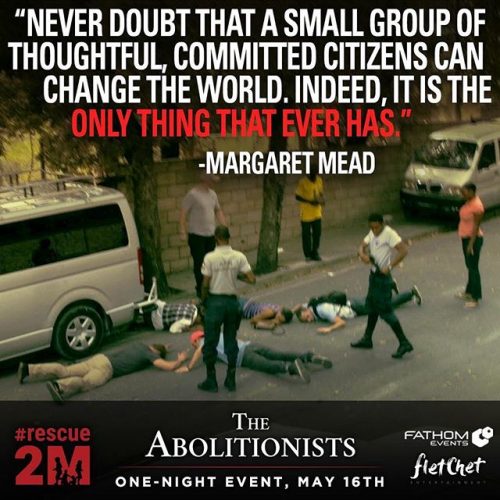 Today I’m sharing with you a cause I feel very passionate about.  Part of being prepared is being prepared to help others.  Especially those who cannot provide for or protect themselves.  The Abolitionists is a documentary that shows how one group is working to do just that by rescuing children around the world who are being held as sex slaves.

Child sex trafficking is one of those topics that is almost too heart wrenching to want to talk about.  I hate having to admit that there are people in the world that are so evil that they use children this way.  Humanity should be better than that.  Yet it is a very real problem, with an estimated 2 million children enslaved world wide.   Human trafficking is the third most lucrative crime in the world, with an estimated $32 Billion in annual profits.  A child is sold into the sex trade every 30 seconds.  And it needs to be stopped.

A few weeks ago I was privileged to be part of a pre-screening for a new documentary called The Abolishionists that will be showing in theaters across the United States ONE NIGHT ONLY on May 16, 2016.  I actually tried to avoid it because, like I said, I don’t even want to believe this really happens.  Plus I was afraid it would be scary, dark, or leave me feeling helpless, and being a late night screening, I didn’t want to take that feeling and try to sleep on it.  But I’m SO GLAD I went!  This movie was none of that.  Although dealing with a very dark topic, the producers and directors kept the show positive and I actually left the viewing with hope instead of helplessness.  So what is The Abolitionists about?  And why am I encouraging you to go see it?

“The documentary features undercover footage from rescue operations around the world, including action-packed, high-risk operations and tender moments of liberating at-risk children. THE ABOLITIONISTS takes viewers behind the scenes as Ballard and his team of highly trained operatives risk their own lives to free innocent children from trafficking, an epidemic that has become the world’s fastest growing crime, with over 27 million people enslaved–nearly 2 million of them children.

“On December 10th, 2013, Special Agent Tim Ballard turned in his Homeland Security badge and resigned from his employment with the United States government after spending a decade rescuing children from child sex tourism domestically and overseas. Though his job was difficult, he was proud that his country was one of very few in the world actually doing anything about this problem.

“However, despite the U.S. government’s best efforts, Tim observed that red tape and bureaucracy left many children falling through the cracks. These children constitute over 90% of the children lost to child sex slavery, and Tim could do nothing to help them while in the employment of the US government.

“Now the Founder and CEO of Operation Underground Railroad (O.U.R.), Ballard and his team investigate and rescue enslaved children from around the world, while undercover film crews posing as traffickers record each of these dangerous rescue operations.

“Utilizing hidden surveillance equipment to capture every moment, the stories of O.U.R. and Ballard’s triumph over evil will leave viewers both disturbed and inspired to join in the fight of THE ABOLITIONISTS.”

This is a high quality documentary produced by Gerald Molen, the producer of Jurassic Park and Schindler’s List.  It is well worth your time to go see this show and get educated about what can be done and what is being done to help rescue these kids.

What can You and I do?