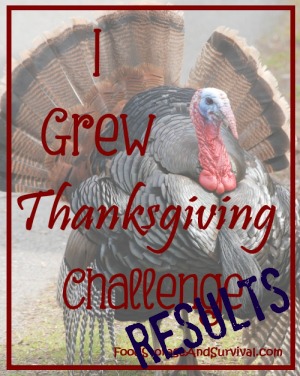 Last year, shortly after Thanksgiving, our extended family tossed around a crazy idea.  Maybe next year we could eat only foods we grew, hunted, or gathered ourselves for our Thanksgiving dinner.  Could we do it?  Could we produce a homegrown Thanksgiving dinner?  Would the less enthusiastic members of the family still want to come eat it?  So we got a plan together and worked on it throughout the year.  We planted, preserved, hunted, and fished for food we could eat at our Thanksgiving meal.  For the foods we couldn’t produce ourselves, we got as close to the source as we could.  And how did it turn out?  Well, nobody went hungry.

Here’s what we ate:

A week or two before Thanksgiving, we realized we had planned the meal, but not appetizers.  Thanksgiving just isn’t Thanksgiving without some kind of appetizer!  We decided we could do a cheese and cracker tray with homemade jams and jellies.  Cheese was purchased from a local dairy (thanks, Cozy Cow Dairy!) that has their cows on site and makes their cheese in house.  We made a variety of crackers from wheat we ground.  Jams and jellies included my peach-raspberry jam, peach peel and pit jelly, peach jam sweetened with honey, and mom’s strawberry jam, ground cherry jam, and jalepeno jelly. 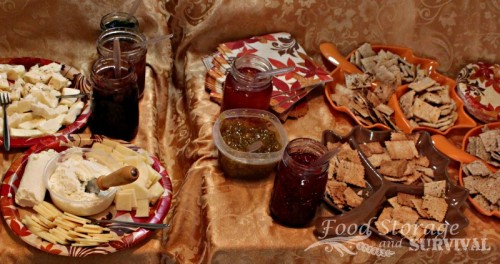 Then baby sister, who is expecting, brought pickled okra and green beans she had grown and pickled.  She wanted a pickle tray which hadn’t been in the plans, but mom had pickled wax beans, beets, and asparagus, all from her garden, so we threw together a pickle tray.  Magic. 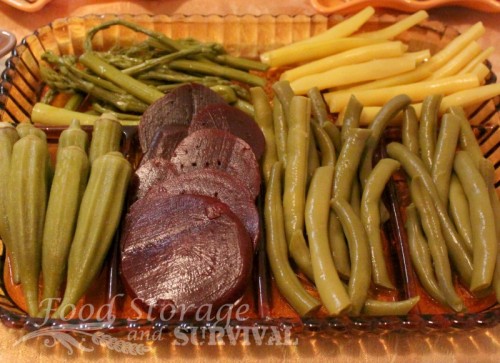 Drinks were another area we didn’t originally plan on, so we scrambled to throw something together besides water in the days preceding the meal.  Ended up with fruited water–slices of lemon and satsuma from baby sister who lives in a much warmer climate than the rest of us, steeped in ice water.  Turned out great!

The salt we used was Redmond RealSalt which is mined somewhat local to me.  We couldn’t grow pepper, so we ground peppercorns to make it as fresh as possible.  Mom also made a poultry seasoning (not pictured) using dried parsley, sage, and thyme from her herb garden.  We ground dehydrated onions from mom’s garden into onion powder with a coffee grinder, and baby sister grew cayenne peppers and dried and powdered them into cayenne powder for anyone who wanted to add a little spice to their meal.

Butter was used in cooking, baking, and on the table.  We made the butter from cream from Cozy Cow Dairy.  One batch of butter we even churned in my grandma’s old butter churn.  Most of the butter was made with mom’s kitchenaid mixer.  Lots less work that way.

The turkey was raised by my mom.  She raised two heritage birds rather than meat breeds, so they ended up at approximately 7.5 and 8 lbs.  We ended up using the second one as leftovers, because we had plenty of other food to supplement the turkey.  As a side note, raising your own turkey is much more expensive than buying one at the store with the cost of the pullets and feed.  But you know you’re getting fresh turkey without any additives. 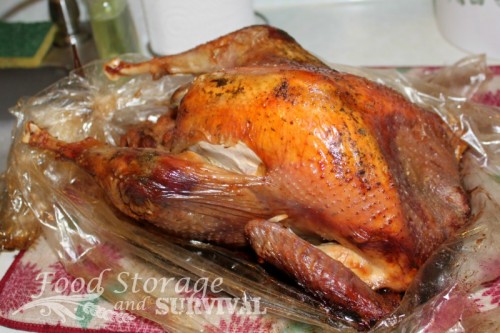 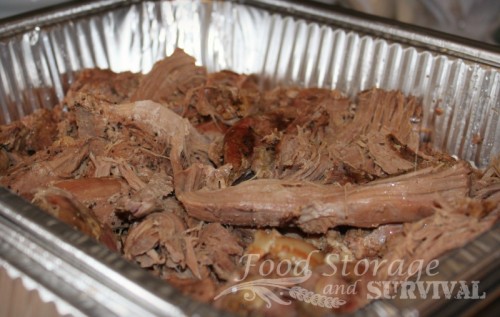 And grilled and fried redfish and fried speckled sea trout caught by baby sister and her husband.  Her husband cooked them up and we even had lemon slices and scrounged up some parsley in mom’s herb garden for garnish.  A little different for Thanksgiving, but SO good.  They are definitely invited if we do this again.  ;)  The cornmeal for the batter was ground from dry corn I grew. 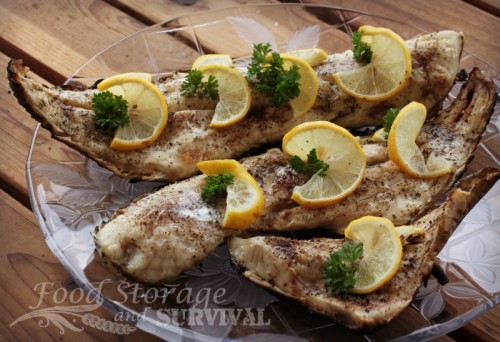 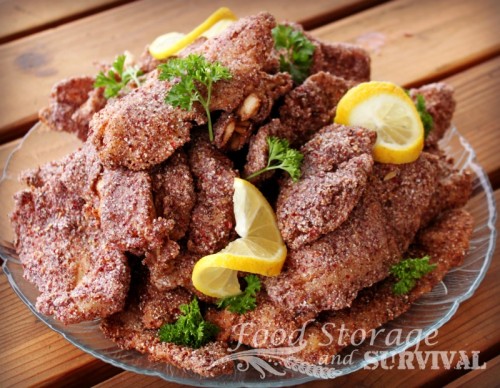 Mashed potatoes courtesy of a farm in Idaho.  I didn’t plant potatoes and mom’s crop didn’t do well, but I have a friend that goes to Idaho every fall and offers to pick up potatoes from one of the farms there for anyone who wants some, so we used those potatoes.  Gravy was made from the turkey juices.  Mom had saved potato starch from fresh potatoes to use as a thickener, but we used it all on the pies, so we tried to thicken the gravy with whole wheat flour which didn’t work well, so we ended up adding a little corn starch to thicken it.

Stuffing was made from homemade whole-wheat bread, celery mom grew, and apples from the middle sister’s tree. 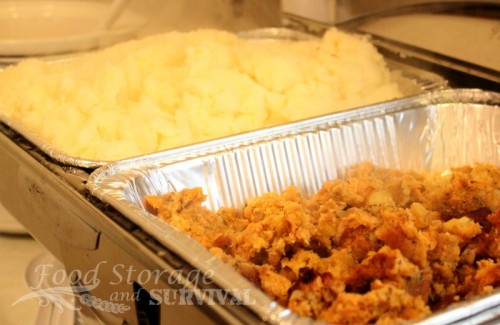 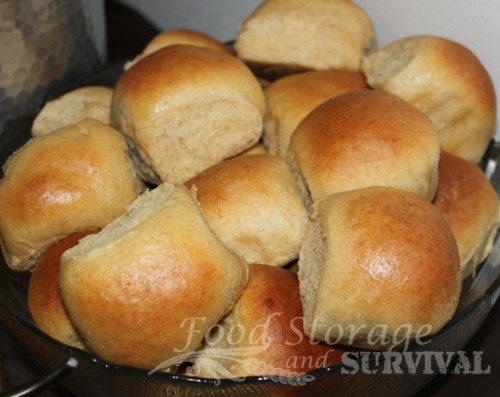 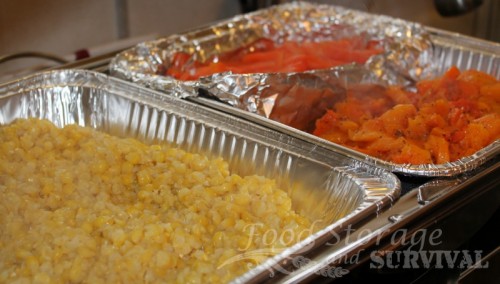 Peaches from my peach tree. 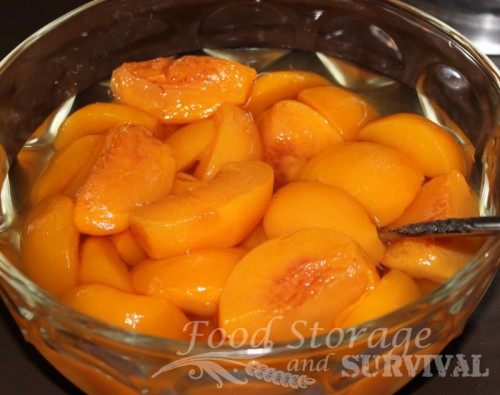 We could have had green beans from my garden or mom’s but decided we probably had enough veggies already.

Mom made pie crusts using fresh ground white wheat and homemade butter which actually turned out really well.  We made pumpkin pie from pumpkin that she grew, her chicken’s eggs, and using our honey as sweetener.  (Spices were from the store.)  Whipped cream from the little local dairy (they really saved us in the dairy department for this meal!). 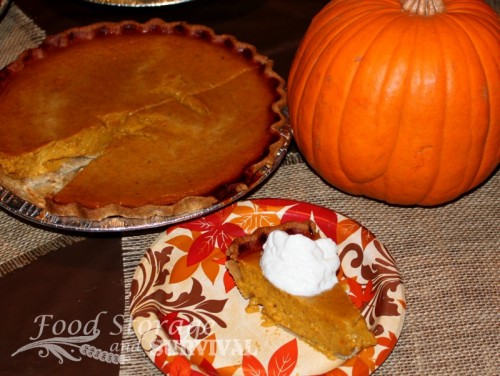 We also had apple pie from middle sister’s apple tree and peach pie from my peach tree.  Sweetened with honey and thickened with potato starch mom had saved from fresh potatoes.  I’ll show you how it’s done in an upcoming post, but it works a lot like corn starch.

Lemon meringue pie was the only one that didn’t turn out fabulous.  We used the fresh lemons baby sister brought, honey as sweetener, and potato starch as the thickener.  When we first cooked the lemon custard, it was nice and thick and smooth.  Then we let it sit overnight in the crust waiting for the meringue Thursday morning.  When we pulled it out of the fridge the next day it was cracked and separated with lots of liquid in the cracks.  So we covered it with meringue and pretended nothing was wrong with it.  Well, it didn’t just look funny, it had a strange grainy texture.  Some kind of reaction with the lemon, honey, and/or potato starch.  The honey/potato starch combination worked fine in the other pies, so maybe some chemist out there can explain what happened, but that pie was not good.  The chickens got it.

What?  Well, the decorations weren’t completely grown by us, but they did include nuts foraged by mom and seed pods from gum trees foraged and donated by the oldest brother’s family who ended up not being able to make it to the meal. 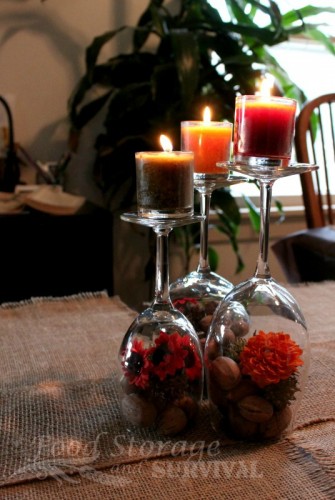 Overall, this meal was a huge success.  Everyone helped out with the growing, hunting, and cooking, and it was so fun to sit back and enjoy the food we produced ourselves.  Even those who were initially skeptical about the idea were happy with the end result.

Would your family do it?  If you want to try something crazy like growing the whole Thanksgiving meal, it’s best if you can get planning early.  Maybe you have a cranberry grower in the family or a milk cow that would make it even better!

Did you grow any of your Thanksgiving meal? Let me know how it went in the comments!