Finally the snow has melted and the garden dirt is workable, so yesterday I planted some of the cold crop seeds out there. I put in two varieties of peas. One of them strictly from the seeds I collected last year.  We’ll see how they do.  I’m actually relatively confident they’ll be fine because as I was digging in the dirt, I found quite a few pea seeds that hadn’t been collected last fall and had spent the winter under the snow.  A couple of them were actually in the dirt and looked like this: 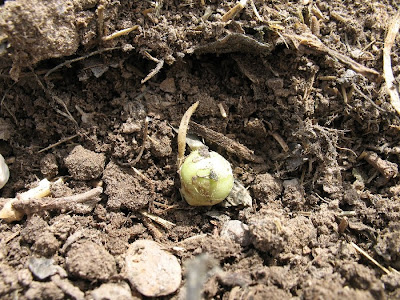 That’s a good sign.  In fact, I almost planted the peas in a different location than last year, but when I saw the number of “volunteer” plants I was going to get, I realized that it didn’t matter whether I put pea seeds there or not, peas were going to grow there. Quite a few other old peas were on top of the dirt and looked like they had tried to sprout under the snow then dried out when the snow was gone.  Like this: 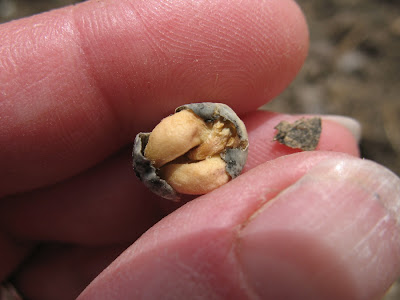 I also put in carrots, spinach, and radishes.  I let a couple of radishes go to seed last year and planted some of my own radish seeds.  We had a freeze hit before I think the seeds were quite done last fall–you can see the difference in my seeds on the right and the radish seeds from Hometown Seeds on the left.  Yeah, a bunch of mine look a little green.  I planted them in a different section than the Hometown Seeds radishes and I’ll see how well they do.  By the way, I’ve been really impressed with the survival seeds packet from Hometown Seeds.  They were not skimpy in the amount of seeds they sent. 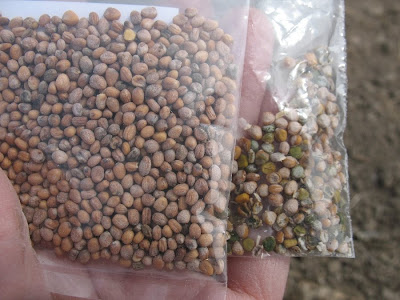 It was sure a nice day to go dig in the dirt and get some spring garden going. :)