Looking for something a little different for giving the children in your life this year?  How about gift ideas that will inspire a love of America and Liberty in children?  As Ronald Reagan said,

“Freedom is never more than one generation away from extinction. We didn’t pass it to our children in the bloodstream. It must be fought for, protected, and handed on for them to do the same, or one day we will spend our sunset years telling our children and our children’s children what it was once like in the United States where men were free.”

And so it is our duty as parents and grandparents to keep that spark of liberty alive in our children.  To teach, inspire, and help them to understand where our country came from, where it is headed, and what they can do about it.  Thankfully, there are some fantastic resources that are available for liberty loving parents to help us with this responsibility.  Most of this list is geared toward the kids themselves, with a couple items at the end more suitable for the parents of children.  We’ll start young and move up by age/maturity level. 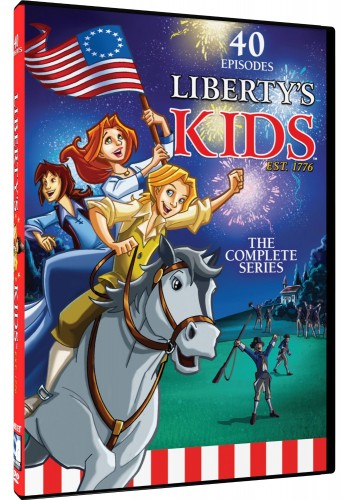 Liberty’s Kids was produced for PBS a number of years ago and used to be difficult to find and expensive to purchase.  I have no idea why, but the entire series is currently available on DVD on Amazon for $5.00.  Yes, that’s five dollars.  Four disks, hours of educational entertainment, better character building potential than most animated movies.  This is a steal.  Younger children especially will enjoy the adventures of three colonial children working for Benjamin Franklin’s newspaper who happen to get caught up in every major event surrounding the founding of our nation.  Featuring the voice talent of Walter Cronkite and Billy Crystal among others, this is a quality production my kids have loved.  Best for children under 12, but my teens still watch it.

Conceived and written by Connor Boyack, founder of the Libertas Institute in Utah, these books are geared toward 6-12 year olds and teach the principles of liberty in an easy-to-understand, kid-friendly story.  Also great at clarifying these principles for the adults that read them.  There are currently two books available, The Tuttle Twins Learn About The Law which teaches principles from Frederic Bastiat’s The Law, and the brand new The Tuttle Twins and the Miraculous Pencil, outlining the principles of a free market economy.  Beautiful illustrations keep even the younger listeners interested.   My children love these books as well.  See my full review of The Tuttle Twins Learn About the Law, and listen in to my interview with author, Connor Boyack. 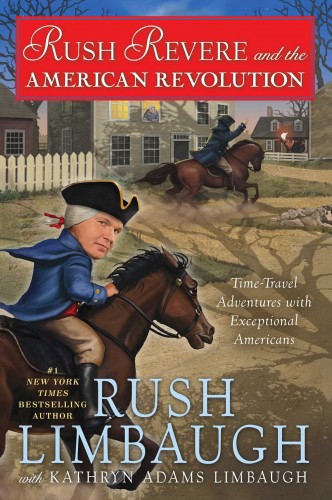 A series of books featuring written by Rush Limbaugh featuring substitute teacher, Rush Revere, and his time-traveling horse, Liberty who take kids back to important events in our nation’s history.  In the first book, Rush Revere and the Brave Pilgrims, they join the pilgrims on their trek to America, including trials along the way, the Mayflower Compact, and the struggles of settling in this new land.

The second book, Rush Revere and the First Patriots, Rush Revere, Liberty, and a couple of the kids travel to events like the Boston Massacre, the Boston Tea Party, and to Windsor Castle to meet with King George III.  They meet historical Americans like Benjamin Franklin, Samuel Adams, Paul Revere, Patrick Henry, and learn about the taxes imposed by the king, including the Stamp Act.

Rush Revere and Liberty return in their third book, Rush Revere and The American Revolution.  It’s 1775 and Rush and the kids visit with the American soldiers, experience Paul Revere’s midnight ride, the battles of Lexington and Concord, and witness the signing of the Declaration of Independence.

These books are best for about ages 8 and up to read on their own, or are perfect for reading aloud with younger children.  My 10 year old is loving them. 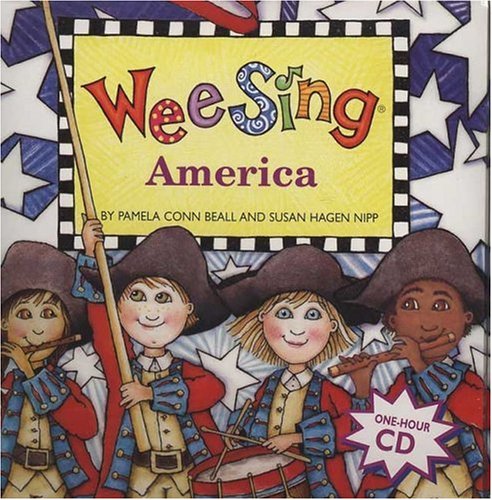 Classic sing along songs from America’s past including Yankee Doodle, The Star Spangled Banner, and When Johnny Comes Marching Home mixed with quotes from famous Americans and historical documents like Patrick Henry’s speech and the Preamble to the Constitution.  53 tracks in all, this is one you’ll want to have in the car to keep the kids (and maybe even you) singing.  Preview the tracks here, then get it on Amazon here.

For older children and teens:

Although a trip to Washington DC and the surrounding area would be great, you don’t need to visit Independence Hall to get a taste of US history.  Historical sites, museums, and reenactments can be found in every state.  Of course, your younger children would love these trips as well.  Check out these resources: 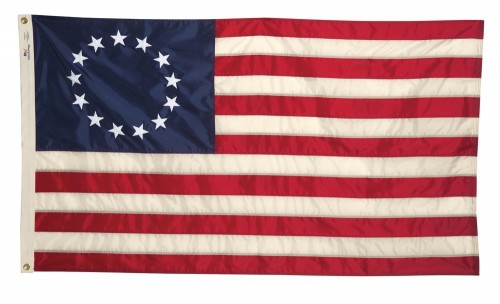 The United States has a rich history, and a flag of some kind flew over almost all of it.  Historical flags are inexpensive and you can research the historical context of the flag together.  These are some of my favorites:

7.  Copies of the US Constitution, Declaration of Independence,

and Bill of Rights

These are the documents that founded our nation and we are still supposed to be abiding by.  Have your children read them?  It’s tough to teach a return to our founding principles if you don’t know what they are.  Get these classic documents in book form or these cool (but harder to read) parchment reproductions of the originals. 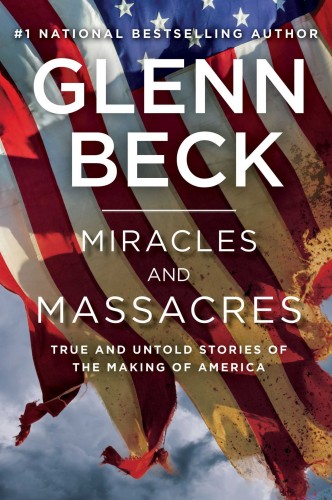 In Miracles and Massacres: True and Untold Stories of the Making of America, author Glenn Beck shares stories from our nation’s history you may never have heard that inspire and educate.  My 15 year old loved this book, and got so excited about some of the stories, he read them out loud to us all at the dinner table.  He said I should warn you there is some cussing in it, so it’s probably best for teens and older.  Each chapter is a separate story, so it’s easy to read in pieces.

9.  Gods and Generals and Gettysburg

These DVD’s beautifully present the complexity and depth of the American Civil War.  Based on the first two books of a trilogy by Michael and Jeff Shaara, Gods and Generals and Gettysburg are definitely worth the watch.  Mild war bloodshed.  Under $10 for both is a bargain at Amazon.  Paskett family favorites.

Seven part HBO mini-series on three disks, John Adams takes you into the life of one of our Founding Fathers and the second president of the United States.  A gritty, non romanticized version of historical events surrounding the American Revolution from one of the men central to it.  My husband and I really enjoyed this show as did our older kids.  The younger ones got bored easily with it.  Recommended for about age 12 and up.

Three disc PBS documentary series.  From an editorial review: “Liberty! The American Revolution” is a dramatic documentary about the birth of the American Republic and the struggle of a loosely connected group of states to become a nation. The George Foster Peabody award-winning series brings the people, events, and ideas of the revolution to life through dramatic reenactments performed by a distinguished cast.

This was another one my husband and I and the older kids enjoyed.  It is a documentary, but they do a good job of making it not dry and boring.  Again, I’d recommend this one for about ages 12 and up. 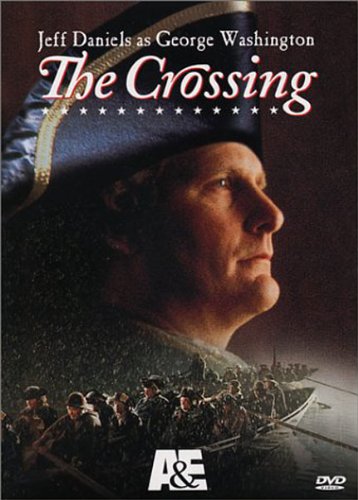 This A&E movie, featuring Jeff Daniels as George Washington is centered around the story of Washington crossing the Delaware River to attack the Hessian troops in December of 1776.  This battle was a major turning point in the American Revolution, and The Crossing is a movie we all enjoyed.  I’d say about age 8 and up on this one.

Alex is a naturalized American citizen himself, and this short CD is his tribute to the nation he now calls home.  The title song, Calling America, was written to express his feelings after the attacks of September 11th, 2001.  I have met Alex and heard his story about recording this album.  One of the most gracious, genuine men I have ever met, plus he’s a pretty darned good singer as well.  Only five songs on this CD, but worth the purchase price.

14. How to Raise an American: 1776 Fun and Easy Tools, Tips, and Activities to Help Your Child Love This Country

I got this book shortly after it was first published and LOVE it.  It has history of our country, holidays, websites and historical sites to visit, inspirational stories, and projects for helping your children understand what’s so great about America.  I love this book so much I bought a second copy to donate to our local library.  Excellent choice for parents of children from small to teens, it would also be fantastic material for home schooling families.

A monthly publication focusing on liberty and preserving the founding principles of America, Imprimis features transcripts of speeches given at Hillsdale College in Michigan.  It’s only about 6-8 pages long each month, so it’s not overwhelming and carries great messages month after month.  Plus it’s FREE.  Can’t beat that.  Suited for adults or older teens.

Hillsdale also offers free online college level courses (not for credit) on the subjects like the Constitution and classic literature.  This is a college that takes no federal funding, allowing them the freedom to teach courses in the best way they see fit without facing any kind of financial retribution for their conservative education philosophy.  I have no affiliation with Hillsdale other than supporting them and their mission.  Donations to Hillsdale are always appreciated.

What about you?  Do you have a gift idea that can help foster in our children an understanding and love of liberty and America?  Let me know in the comments–I’m always looking for ideas!