This is not the first time food storage has saved dinner.  Just the most recent time.  It was Sunday (you know, when I avoid shopping and all the stores around here are closed anyway).  We had been visiting friends and I needed a quick dinner, so I went to the food storage room and pulled out three cans of clam chowder.  The kind you just heat and eat.  Heat up some clam chowder and serve with some bread–quick and easy.  Unfortunately, two of the cans of soup had been in sweet husband’s work truck kit for some time before making it to the food room, and apparently they don’t react well to being frozen and heated and frozen and heated in the back of a pickup very well because when I opened the can I could tell something wasn’t right with them.

They were all grainy and not smooth and creamy like their counterpart who had lived its whole life on a shelf in a temperature controlled environment.  They didn’t smooth out when I poured them out and mixed them.  A little iffy, so I opted not to eat them.  The dog liked them just fine. 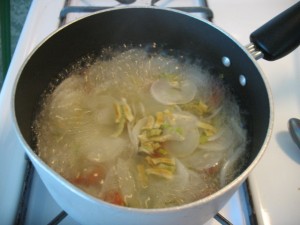 So I got the dehydrated goods cooking in some water, added milk and butter/flour to thicken it, a can of clams, some seasonings, and then added the one good can of soup at the end to make the pot more full. 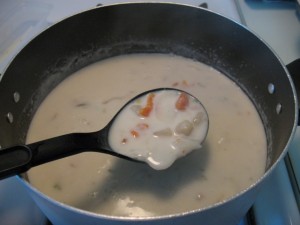 Voila!  Food storage sames dinner.  And it was pretty doggone tasty.  Now, I could have just decided to make something else, but I already had the good can of soup open and I really wanted some clam chowder at that point.  It took about 20 minutes longer than just opening a can, so not too bad on time either.  Has your food storage ever saved you?