Finding directions using the night sky is a valuable skill if you ever become disoriented long enough that you are stuck outside somewhere during the night.  It could mean the difference between finding your way back to your camp/vehicle/etc. and becoming increasingly more lost.

In the northern hemisphere, we’re kind of lucky.  There is a bright star that sits exactly over the north celestial pole.  This is the star that all other stars appear to rotate around as the earth turns.  It is called the North Star, and it can help find north.  (You can click on any of the pictures to make them bigger, then the back button to bring you back to the post.)

Finding the North Star is fairly simple.  First, locate the Big Dipper.  This is the constellation that looks like a big soup ladle made of 7 stars.  If you extend the line created by the last two stars on the cup, the first bright star that line hits is the North Star.  The  North Star also happens to be the star at the end of the handle of the Little Dipper constellation.

Draw an imaginary line straight down from the North Star, and that is north. 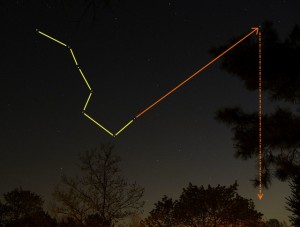 Now try it in this picture.  In this one you can actually see most of the Little Dipper as well.

Once sweet husband was out on a hike doing some black bear research with a small group of other college students.  They had driven in a truck, then rode snowmobiles, then hiked down into a canyon.  In the process of finding the bear den, they hiked all over the hills and canyons for a good part of the day.  By the time they were done, it was starting to get dark and they decided it would be faster from where they had ended up to hike to their truck instead of back to the snowmobiles.  They hiked and hiked in the dark and couldn’t figure out why they weren’t finding the truck.  The leader guy said he knew the truck was parked north of where they had ended their hike.  Well, he thought he was leading the group north, but when they checked the stars they had actually been heading south, away from their truck.  It didn’t take long after they turned around and hiked in the right direction before they got back to their truck and were on the road back to a nice warm cabin.  Thanks, North Star.

In the southern hemisphere, you’ll be finding south, not north, and things aren’t quite so simple.  There isn’t a bright star at the southern celestial pole, so other markers are needed to find your direction.  The most commonly used constellation is the Southern Cross and related Pointer Stars.

Another way to find this point is to use the pointer stars.  Extend the cross line as you did before.  Now draw an imaginary line between the pointer stars, then at the half way point of that line start another imaginary line perpendicular to your first line.  The point where this perpendicular line intersects the line created by extending the cross is also near the south celestial pole.  These aren’t exactly south–they’re off by 5-6 degrees, but if you just need to head in one direction, it’s definitely better than not knowing which way you’re headed at all. 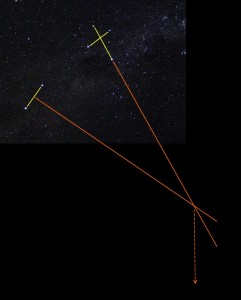 Now don’t get lost out there!  Finding directions using the stars is another requirement for LDS Girls Camp.  Find more requirements here.