Today we have a special guest post from John Durfee.  I’m not experienced with airsoft much and he’s got some real good ideas here.  Thanks, John.  Enjoy :)

You’ve been watching him from your post for about ten minutes now. Your ingenious buddies knew of an old deer stand, which has made for an incredible lookout. He hasn’t noticed you and has been resting by the bank of the stream catching his breath- your friend did pursue him for almost an hour. He’s filling up his canteen and you know it’s time, you have the perfect shot with him crouched over absorbed in what he is doing. You carefully and slowly raise your rifle, aim and “Crack” “Crack” “Hit!” You’ve taken out another one, now only two to go!

What I’ve just described isn’t the latest Hollywood action film: it’s the sport of Airsoft, and while fun, can be a valuable tool in teaching real world skills and be great for families. 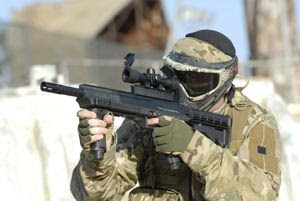 Airsoft originated in Japan in the late 1970’s. Japanese law after World War II prevented civilian ownership of firearms, so companies started to produce air powered realistic looking replicas for public use. Over time, clubs began to develop, and the sport of airsoft was formed. In the United States, airsoft had only had a small following up until the late 1990’s. This was because the only manufacturers of airsoft were from Japan and Taiwan, and importing airsoft guns was on a small scale because of their high initial prices and need for specialized knowledge. In the past decade however, the sport has developed from a small niche in the sporting market to a very popular sport and tactical simulation tool. Because of recent robust and more affordable designs coming out of neighboring China, airsoft has become hugely accessible to the public. There are fields and stores nationwide that are helping to spread the excitement and knowledge of this fun and safe sport.

Airsoft is different from air rifles and pellet guns in that they use standardized 6mm plastic bb’s that weigh far less than metal pellets or sabots, and are perfectly safe in a controlled play environment.

Airsoft is preferable to paintball to train with because the equipment requirements and initial cost are much lower. For airsoft electric guns (AEGs), only bb’s, a battery, and a charger are needed. With gas powered airsoft, you’ll need bb’s and green gas (the pressurized gas needed to run the guns) Also, its cleaner than having to wash all your clothes after a day of play.

There are an increasing number of airsoft clubs and organizations that put together multiple day events that can be attended for a set fee. They’re run on weekends, usually centered around military scenarios, and the core skills practiced are valuable to real world preparedness. There are varying degrees of immersion, varying from “play and go back to the car for a snack” to full milsim, where one acts, functions, and performs like a real military force for the entire duration. The former are great for family outings, as you can walk out between games at your leisure. Airsoft also teaches proper weapon usage, maintenance, and safety precautions. Most airsoft guns in the mid-range price look, feel, and function as close to the real steel guns as possible. Some airsoft pistols even disassemble the same way as the real thing! You’re allowed to become familiarized with firearms and learn how to use them properly.

Airsoft is safe, but it does require a certain level of responsibility and honesty. People need to call out when they are hit. This is a great structured way to teach kids concepts such as fair play, gun safety, and sportsmanship. Family ties are brought together as you rely on each other and work as a team. With all the running around it provides a great workout for everyone: dad gets in his cardio and the kids and burn off their energy. And sibling rivalry can play itself out in new and interesting ways.

For parents it provides an opportunity to train as close to real self defense scenarios as possible. In the case you ever do need to put these skills to use, you’ll do it having practiced it before, and the more you play, the more ingrained these self defense procedures become.

The most important thing these events teach is mindset. You have to work in a team, placing your trust in each other. You have to be constantly aware of your surroundings, as your family trusts you to be a set of eyes and ears. You learn to distinguish between friend and foe. You’ll hone your aiming and marksmanship skills on real targets who will react and move. You’ll train yourself how to respond – rather than react – to surprises and potential threats. And if you’re “killed” you can learn from your mistakes, and do better next time.

To be honest airsoft bb’s can have a bit of a sting to them. But throwing on a heavy sweater or light jacket will make sure you feel them, but it will be more of a poke than a pinch. And remember the cardinal rule, ALWAYS WEAR EYE PROTECTION, while they may not have weight, bb’s fly very fast and you need to protect your eyes and those of your family.

Most airsoft fields (indoor and outdoor) have an open entry policy, you can play for a few hours, and go home. Many paintball fields are now becoming dual use fields, for both airsoft and paintball so you might want to call any local places to confirm.

Try googling the term ‘airsoft’ and your state, you’ll find forums where people get together and arrange outings. Airsplat has a site with a comprehensive listing of fields across the US. So get out there with your kids and have a safe and fun time!

(PS Always check with your local law enforcement about regulations, wear proper eye protection and NEVER try to modify the orange tips on your airsoft gun.)

John Durfee is a Gulf War veteran and the marketing manager for Airsplat, the nation’s largest retailer of Airsoft Guns and Apparel.