I planted some corn this year that was supposed to dry and be ground for cornmeal. I didn’t read that it has a 110 day growing season, which we barely have here, and I didn’t plant it right at the beginning of the season, so when it wasn’t dry by the first hard frost, I called my extension agent who told me it was okay to leave the ears on the stalks through the frost. So I did. Then a couple of weeks later, I pulled the ears off the stalks and pulled the shucks back to expose the corn kernels which STILL were not dry. It was really cold that day, so I just tossed all the ears in the wheelbarrow and drove them to the shop where they could stay “inside”. However, they weren’t going to dry all piled on each other, and the shop gets pretty darn cold which is not conducive to drying corn ears. I knew the ears had to come in the house where it was warm enough for them to dry, but there’s quite a few of them and my house is only so big (well, actually it’s pretty darn small), and the places I’d like to have a bunch of corn hanging around are even more limited, so you know that saying, “Necessity is the mother of invention”? Well, I took some clothesline and strung it from nail to screw to nail to different nail to another screw that were already sticking out of the rafters in my furnace/freezer/storage room in sort of an ADHD spiderweb pattern. Really random–I just didn’t feel like pounding my own nails in to make it all nice and neat. Then I clothespinned the ears of corn to it. Now they are happily drying in my storage room using space that I didn’t have anything else in (and I thought there was no such space in my house). 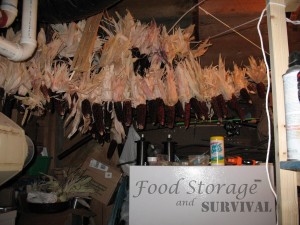 Okay, that picture kind of stinks if you haven’t been in my storage room–hopefully you can make it out. The corn is really dark red–it’s called Bloody Butcher corn. Don’t you think RED cornbread or RED corn tortillas will be fun?