In the past I have dehydrated zucchini by slicing it and then drying the slices to add to soups, etc. I have also sliced it thin and sprinkled seasoning on it and dried it to make “zucchini chips”. They weren’t bad, but they weren’t something I wanted more of–maybe I didn’t use the right seasonings–it’s been a while, I really can’t remember what I sprinkled on them. Might be worth experimenting with again. I’ve also frozen zucchini in 2 cup packets so I can make bread with it later, but freezer space is limited around here.

So this year I’m getting a little wild and I’m dehydrating shredded zucchini. Now in theory this should be able to be added to breads like fresh zucchini. Maybe you’d need a little extra liquid in your mix or maybe rehydrate the zucchini first? I’ve never tried it, but here’s a recipe for zucchini-rhubarb bread using dried shredded zucchini from Mary Bell’s Food Drying With an Attitude. Maybe you could substitute more zucchini for the rhubarb if you don’t have it, or just use this recipe to figure out about how much liquid, etc. you need when using dehydrated zucchini instead of fresh. If anybody has experience baking with dehydrated zucchini, I want to know how it went!

In a small bowl, combine the zucchini, rhubarb, and water, stir, and let sit 30 minutes.

Bake 1 hour, or until a toothpick comes out clean.

So now we have that out of the way, here’s how to dry your shredded zucchini. First you need a zucchini or two or three or however many your garden or friend gives you. (On a side note here, you know you don’t have any friends if you have to buy zucchini during the summer.)

Then shred your zucchini using any method you want. You could peel it first if you want to, I left the skin on–it’s kind of pretty that way. A food processor is really nice here. Mine is old and the lid doesn’t latch right anymore, so it’s kind of dangerous for shredding stuff. I still chop in it–I just have to hold the lid down while it’s chopping, but shredding is not all that safe, and $35 for a cheapo new food processor just isn’t in the budget, so if any of you are looking to offload a food processor, let me know and I’ll give you my address to ship it to :)

Anyway, back to the procedure. I used a “salad shooter” we got a gazillion years ago and it shredded the zucchini without too much trouble. Next, put your shredded zucchini on your dehydrator trays. The less overlap you have, the less it will stick together at the end, however, it dries so crispy you can just kind of break it into bits after its dried anyway, so I didn’t worry too much about having each strand separated from the next. In fact, I didn’t worry about it at all. Just put the zucchini on the trays and kind of spread it evenly over the tray. 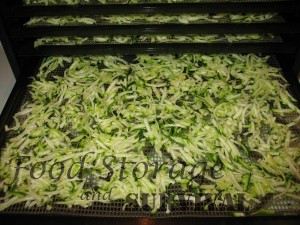 Dry at 125 degrees for about 5 hours. Here’s the same tray after the 5 hours. Where did all the zucchini go? Crazy. Dehydrating is like magic. 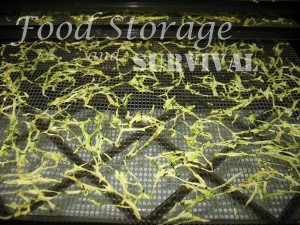 On one tray I measured 2 cups lightly packed shredded zucchini and it came out to be a scant 1/2 cup of dried shreds.

The whole dehydrator full of zucchini shreds fit in a quart jar. Amazing. Into the food room it goes and someday when I’m feeling adventurous (after I’ve used all the frozen zucchini) I’ll try it in bread. It could also be added to about anything you’re cooking (ground beef, soups, etc.) just for some added nutrition. Use your imagination here.