We grew a couple of new varieties of beets this year.  I’m not a huge beet fan, but other members of the family really like them.  To me, they pretty much have always tasted like dirt.  That is, until last year, when I took my mom’s advice and froze them instead of bottling them.  That made a huge difference in the flavor for me.  Still not my favorite, but definitely more appetizing.  So this year we grew two new heirloom varieties of beets, the Chioggia Beet and the Golden Beet.

The Chioggia Beet is candy striped inside–like a target if you cut it open horizontally.  Here’s a picture courtesy of southernexposure.com which is not where I got my seeds, but they do have them for sale there. 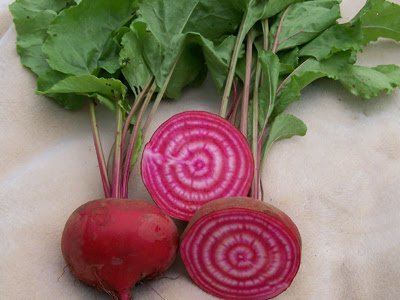 They actually did look like that inside.  Very impressive.  However, you don’t eat beets raw, and after they were cooked to get the skins off, the colors bled into each other in a bad way.  There was no white or red, but rather a kind of pale pink beet with barely distinguishable rings.  Some were pinker than others and a few were so un-pink as to be downright pale and icky looking.  The chickens got those–if I’m going to serve beets I want them to look nice.  This was one of the best ones for retaining it’s stripes. 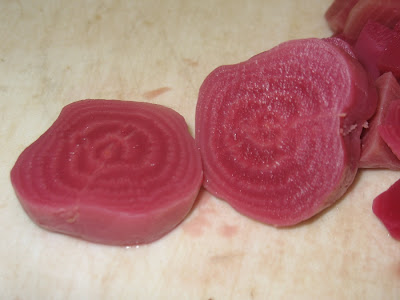 Most turned out very bled together.  Bummer since they were really so pretty and striking to begin with. 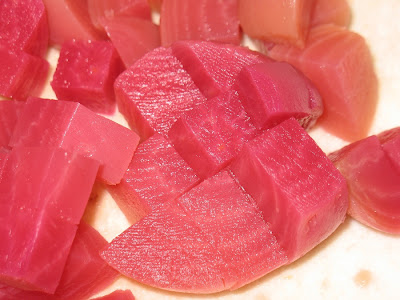 The golden beets, which I did not photograph, were really pretty golden orange when raw, but faded when they cooked to a nasty yellow/green/weird color.  The horse got all of those–I’m sure I’d have a mutiny from the entire family if I tried serving them.

So that was a fun beet experiment even though I wasn’t really pleased with the end results.  However, I did learn that I really like deep red colored beets best for eating, so we’ll just stick to plain ol’ red beets next time. :)