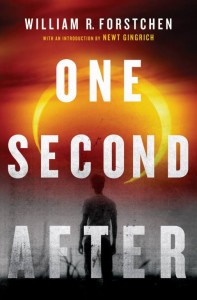 I recently got a copy of the book One Second After

by William Forstchen.  This is not a new book–it’s been out for a couple of years–I’m just a bit behind on getting it read.  It is a New York Times bestseller and you’ll probably be able to find it in your local library.  You know I live in the sticks so my library didn’t have it.  Maybe I’ll donate a copy next time I owe library fines.

Anyway, enough about  my library fines, let’s get on with the review, shall we?

is a fictional story set in a small town in North Carolina.  A retired army colonel is raising his two daughters and teaching at the local college when there is an EMP strike.  EMP means Electromagnetic Pulse and it happens when a nuclear weapon is detonated in the Earth’s atmosphere.  Basically the effect of an EMP is that everything that is run by electronics/computers and wasn’t sufficiently protected has its wires fried and no longer works.  That means cell phones, computers, radios, most cars (exept those made before they were run by electronics), trains, airplanes, and electricity service to your home won’t work anymore.  There is no communication, food and medicines are no longer being delivered to stores on a regular basis, vehicles and the hospital are near useless.

Naturally, an EMP is not a good situation, especially for the bulk of society who have made no preparations for any disaster.  Without giving away too much of the plot, this book covers many of the things that could happen within society during such a disaster.  It is fairly realistic, although a bit idealized in some areas (you do have to give your main character just enough good luck to live to the end of the book, right?).  Like the town just happens to have very limited access routes in and out so it is easier to defend, the main character happens to live next to a national forest so foraging and hunting are viable options for food, and he happens to have “ins” around town that help him get a few of the necessary supplies he’ll need in the first couple of days.  Oh yeah, and the town happens to decide that any food in anyone’s house at the time of the strike is theirs to do what they want with, but any other food will go to the common stock to be rationed to the town’s citizens.  Hopefully that would be the case in a real long term disaster, but martial law and hungry panicked people could very well come to a different conclusion and require residents to give up their personal food stores for the survival of the community.

EMP attack is actually one of those little discussed (except in the survival community) events that could easily be employed by an enemy.  Taking us back to 3rd world living would kill off a huge number in our population without anyone having to invade the country.  And then the enemy could come in to “help” and never leave.  Or forcefully invade if they wanted to–we’d have little ability to organize any resistance with the limited communications we’d have left in this country.  Scary, right?  I like to think of it as motivating instead.

We can have more EMP discussion another time.

Anyway, back to the book.  It is very well written, believable characters, and quite difficult to put down once you’ve started it.  This is a good one to get a person (yourself or a friend/family member) a little more serious about preparing for survival.  It brings up many of the post-disaster concerns I had already thought of and a few that made for some good discussions with my sweet husband about things we could do better on.  Adult themes are present throughout the book–like death, attraction to the opposite sex, and pregnancy.  Nothing tacky or that would make you blush, but I’m not passing this book on to my 11 year old to read.

Overall, I would definitely recommend One Second After

for a good, thought provoking read or to motivate yourself or a loved one to think more seriously about preparedness.  Check your library–it won’t take you long to get it read, so you should be able to get it back to them without incurring any of those dreaded library late fees I’m so good at getting. ;)