Solar ovens have a very good reputation for cooking things on hot, sunny days, but what if it’s not a hot day? Have you ever wondered how well a solar oven cooks in the winter?  Me too.  So I’ve spent a few days with the Global Sun Oven in the Utah winter.  I’m kind of disappointed I missed the spell when high temperatures were in the teens early in January, but it was only in the low 30’s while I was baking January 15-20, so I wasn’t too far off of super-cold.  And I’m in America, so all the temperatures in this article are Fahrenheit.

One thing about cooking in the winter is that you have fewer hours of available daylight to do the cooking.  The best hours to use the solar oven are between 10:00 am and 2:00 pm, so you need to plan your cooking accordingly.  Which, of course, I didn’t the day I was making bread for the family.  I was planning on putting a loaf or two into the solar oven that day, and the rest in the regular oven, but I didn’t get the bread started early enough, so by the time it was risen in the pans it was 1:30 and I had an appointment at 2:00 I had to be at, so I didn’t want to chance putting a loaf in the solar oven and not being able to monitor whether it would cook all the way that day–especially with the temperatures dropping.  As it was, I had to leave someone else in charge of taking the bread out of the regular oven.

So I tried again on some cinnamon swirl bread since I had a bunch of regular bread already made up.  This time I got started earlier.  I set the solar oven up when the bread was doing its first rise so it could pre-heat. I got the bread in the oven around 11:00 am–it was 30 degrees outside, clear and sunny, and the Sun Oven was 355 degrees.  Perfect.

As soon as the bread started to cook, it sweated and caused some condensation on the glass of the oven.  This is normal, since in order for the oven to retain its heat it is not vented.  This condensation caused the temperature of the oven to drop since it was blocking some of the sun rays entering the cooking chamber, but the temperature stabilized at just over 300 degrees. 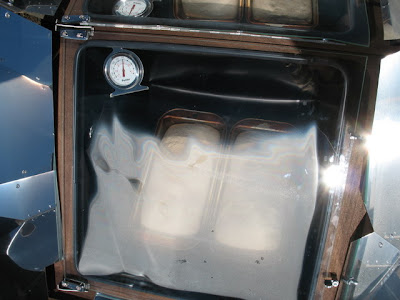 So instead of baking the bread for the usual 40 minutes at 350, I left it in for 1 hour at degrees from 355 to 305.  At the end of the hour, I tested it with my meat thermometer to make sure it was cooked all the way through.  Bread needs to register 175 degrees or higher to be “done”, which mine was, so I took it out and set it on the cooling rack in the house. 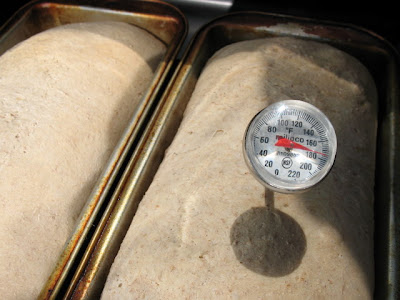 Bread cooked in the Sun Oven doesn’t brown like it does in the oven, so this is blond cinnamon swirl bread.  It cooked up fine, moist and chewy.  In fact, one whole loaf disappeared shortly after the kids got home from school.  Nice.  I hid the other loaf so sweet husband and I can have some! 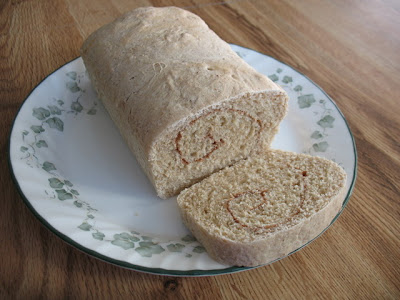 So now you know it works.  You can bake bread in a solar oven in the winter time.  In fact, you could cook about anything in your solar oven in the winter as long as the day has some sunshine.  Just keep that 10:00-2:00 window in mind and you’ll do fine.  If you’re needing a solar oven, the Global Sun Oven is the one I use and sell, just shoot me an email and I’ll get you pricing on it.