Guest post by Alex Grovenstein.  Originally posted on his blog, Back ‘er Down: In pursuit of a more simple life

Note from Angela: Living in a place that Sugar Cane does not grow, I’ve never even attempted making pure cane syrup.  This is fascinating and an absolutely priceless experience!  Thanks for sharing, Alex!

The fair is finally behind me and so is my second year of learning the syrup-making trade.  This second year was much more informative and hands-on than last year was.  As I often write about learning forgotten skills, I figured that a recap of my week and some details on the process and people might make for some good material.  Big thanks to my friend Casey Jones for sharing these pictures!  The story is always much more compelling with visual aids!  Hang with me…….I’m going to jump around.  I’m going to share some of the process and some of the people.  It gets long, but it’s Americana at it’s finest.

In our community, the county fair is put on by the local Kiwanis Club, of which I am a member.  This is our only fundraising event of the year and all of the proceeds stay in our community.   The club tries hard to keep the identity of a “real” fair, making sure to include livestock shows, displays of old farm equipment and other heritage related activities.  One of those activities is syrup making.  As the club gets up in age, the need for younger members to take over certain jobs is becoming increasingly evident.  In my time I’ve seen the soap making and candle making exhibits go by the wayside because those artisans passed away.  I have committed to not let the same thing happen to syrup.
The process began a few months ago when we had someone come in to rebuild our furnace.  The years had not been kind to the brick work.  A gentleman by the name of Randall generously donated his labor and expertise to the club and rebuilt the entire furnace…. free of charge.  Randall did so because he loves to see these types of traditions live on.  He later mentioned to me that his daughter had received a Kiwanis scholarship some years earlier as well.  I’m sure that helped too ;)  A few weeks ago we began scouting the sugarcane and gathering wood for the week.  I talked about the time I spent with Mr. Thomas in a previous blog.  He is the reason I’m involved with this in the first place.  Mr. Thomas is no spring chicken!  He’s a good man and very good to take me under his wing and teach me.  I hope that I do him proud.  With the wood stacked, the new furnace drawing like a champ, we were ready for a busy, but enjoyable week.
The fire was hot and the new furnace was up to the test!  At one point we had a 3 ft flame coming out of the top of the chimney! 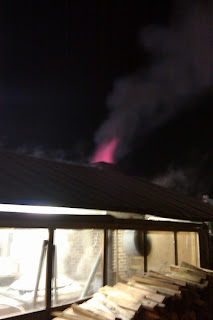 They syrup that we make is pure Cane Syrup.  We add nothing….no Karo, no preservatives…. nothing.  We even probably let a little bit of dirt make it through to the bottles just so that it’s authentic.  It all starts as we feed sugarcane stalks through a cane grinder, or mill, to press the juice from the stalks. 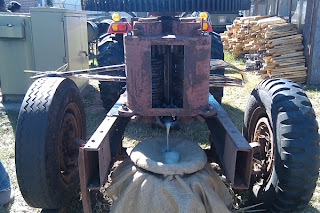