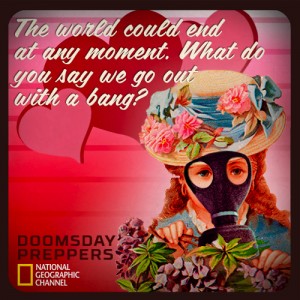 It’s the week of love and National Geographic’s Doomsday Preppers is joining in the fun with a show that features a single male prepper looking for his prepper soul mate.

Jeff is in his 30’s, reasonably fit, lives in Wisconsin, and is the proud owner of a decommissioned government Atlas missile silo somewhere in the middle of Kansas that he plans to make home-sweet-home if the catastrophic economic collapse he fears does actually take place.  He hasn’t been on the dating scene for the last 6 years, so he turns to the old standby to find true love (or at least a compatible prepping partner)–internet dating!  I’m not sure what site he’s using, but he lines up three dates with different ladies, none of which have a clue he might bring up living in a missile silo.  There are dating sites that are specific to preparedness minded folks that could narrow your search some if you’re wanting to go that route–I have a list for you at the end of the post, but for now, here’s a portion of Jeff’s first date:

Now, I am not a regular watcher of other dating shows on TV, but after watching Jeff I have a little more understanding for the irate Facebook posts of those who are not happy with the dating choices being made on their favorite show.  My kids and I had all kinds of advice for Jeff, but he just didn’t seem to be listening to us!

“Oh my! Did you actually just ask her about survival skills and an economic collapse after knowing her for all of two minutes?”

“Call the other one!”

“Jeff, she’s wearing a skirt.  She couldn’t go rappelling if she wanted to!”

As far as preparedness, Jeff is doing some things very well.  He has lots of water and has made some interesting considerations for the protection of the interior of his silo.

Some things he seems to be needing more help on.  Like food, which we didn’t see any of in the show.  Maybe it’s home in Wisconsin or in some room of the silo we didn’t get to go in.  And speaking of home in Wisconsin, it looks like there are numerous options for roads from Wisconsin to the middle of Kansas, but on a good day on the shortest route it’s about a 10 hour trip, so hopefully he’s got plans for making it to the silo in one piece (extra fuel, gear, defense, etc.).  Maybe he’s willing to move depending on where he finds love.

And I laughed at the blindfolding part.  Cute, but if he’s that concerned about keeping his silo location a secret he probably shouldn’t be bringing along the camera crew (who I’m guessing were not blindfolded).  Too funny.

So did Jeff find his preparedness soul mate or is he still looking?  You’ll have to tune in and find out.

The show also features Rock Man and his friend who are burying a shipping container to use as a bunker.  This guy has a little better thought-out plan, and lots of rocks.  Big rocks.  Y’all in southern Louisiana “no-native-rock country” will have to get pointers from someone else . . .

But here are a few online prepper dating sites if you’re a single prepper and wanting to go the online dating route:

And if you are interested in being featured in Season 3 of Doomsday Preppers, send an email to prepperscasting@sharpentertainment.com