I’ll be honest with you all here. I’m no applesauce expert. I once made applesauce that was really good with jonathan and gala apples, and I’ve used golden delicious also and it’s not bad, but there was more flavor with the gala/jonathan mix. In my life now, I’ve made a whole 3 batches of applesauce. Now another bit of honesty–even though homemade applesauce is usually better tasting than store applesauce, I’ve gotten store applesauce 3 cans for $1.00 during case lot sales and it’s a heck of a lot easier than making applesauce. BUT I had some apples so I made applesauce anyway.

Step 1: Wash and quarter apples and put them in a pot. You don’t have to core or peel them, but I do like to cut off the blossom end as that little stuff sometimes makes it through the sieve into the sauce. 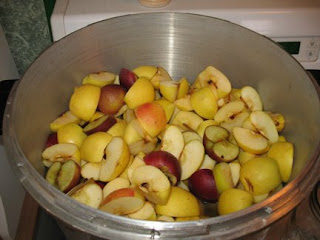 Step 2: Pour some water over them and cook them until they are soft. I poured about 2 quarts of water + 2 TB Fruit Fresh over the apples in my pressure canner, then cooked them up to about 12 lbs pressure and let it cool off. Maybe I overcooked them, I don’t know, but it sure was faster than boiling/steaming them all day . . . 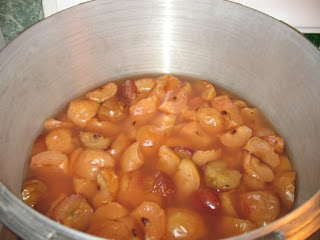 Step 3: Scoop the apples out and run them through a sieve. I have one that hooks to my Kitchenaid, but I’ve used a hand crank one and I have one that’s just a cone shaped bowl with tiny holes in the side and has a wooden thing like a pestle (you know a mortar and pestle) that you just smash stuff against the sides and the good stuff squirts out. Anyway, I use the Kitchenaid one because it’s easy. Here it is all ready for apples: 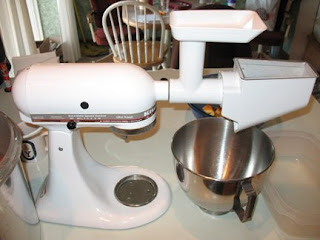 Put the apples in the top, turn it on, and the strainer part strains out the good stuff which falls down the little ramp into the first bowl, and the seeds/core/peel come out the end into the second bowl. Like this: 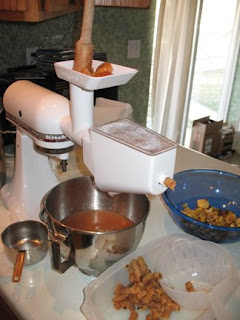 Hey, that picture also shows the strainer/scooper I used to get the apples out–it’s like a colander with a handle so I don’t get so much liquid with my apples. (It’s clear, but it’s sitting in the bowl catching the apple scraps.) Here’s the applesauce in the bowl on the left and the scrappy ick (my kids call it apple poo) in the container on the right: 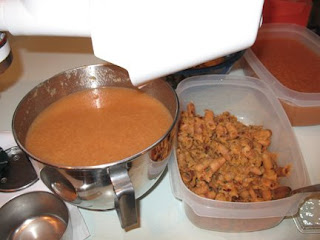 Step 4: Put the applesauce in a pot and cook it until it’s thick enough for ya. Skim the juice off the top when it collects to speed up the process (it collects when you’re NOT stirring). I use my pressure cooker pot again–it has never burned anything and it’s big. Add sugar if you need it and cinnamon if you want it. Every apple gives a different flavor. My jonathan/gala mix needed LOTS of sugar, but I only added a little to the golden delicious batch. 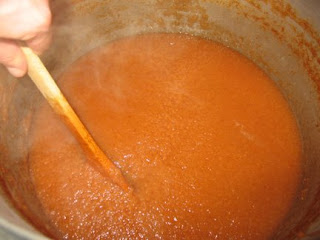 Step 5: Put the applesauce in jars and screw on lids/rings and process in boiling water canner 20 minutes. Of course you’ll put the lid on your canner before canning, and yes, that clock says 8:45 and that’s not in the morning . . . 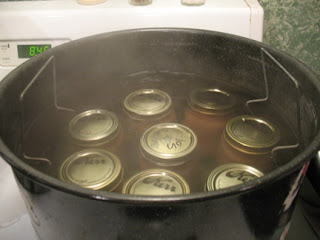 When they’re done in the canner, take the jars out to cool. 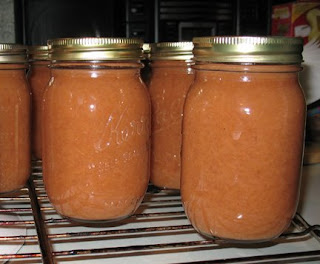 I have been just putting lids on the jars cold to save the step of heating them up and really didn’t think much of it until my sister asked about whether you really had to heat the lids up or not. Every so often I have a jar or two (especially items packed with liquid–fruits, meat, etc.) that comes out of the canner with a lot less liquid than when I put it in. I’m thinking this may be because of the cold lid not sticking to the jar sufficiently at the start of the canning process, so I’m reforming my ways and heating my lids in a little pot of water for my next year of canning and I’ll see if it solves the problem.
I also used about 3 TB of vinegar in my canning water this time (thanks for the idea Emily!) and the jars are all shiny and pretty coming out of the canner. It wasn’t enough to take the hard water lines off my canner or to smell vinegar as I canned. I’ll have to try this in the pressure canner next time I use it . . .
As for the applesauce, I don’t like it much, but I’ll eat it. Wade doesn’t like it, and only one of my kids does. I have 16 pints of it, so I guess I’ll be making applesauce cakes/breads/cookies and hitting the next case lot sale for some applesauce they will eat . . .